Proof That Spandex Doesn't Always Save A Superhero Movie 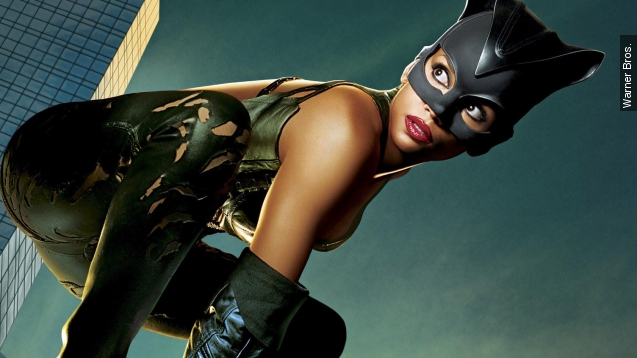 SMS
Proof That Spandex Doesn't Always Save A Superhero Movie
By Eugene Daniels
By Eugene Daniels
July 23, 2015
With the recent surge of superhero blockbusters, you might think they're automatic successes. Not true. Remember these box office duds?
SHOW TRANSCRIPT

Everyone knows if you put a superhero in a movie, you get a box office hit, right? (VIdeo via Warner Bros. / "Batman v Superman," Walt Disney Studios Motion Pictures / "Guardians of the Galaxy")

A powerful dude or dudette saving the world does not always equal big money for studios. Every once in a while, a movie based on a beloved character pisses off fans and embarrasses studios — especially these duds. (Video via Walt Disney Studios Motion Pictures / "Captain America: The Winter Soldier")

Even an Oscar winner couldn't save the "Catwoman" film from itself. On a budget of $100 million, Warner Bros. only got $40 million back. It even famously earned Halle Berry a probably well-deserved Razzie award for worst actress. (Video via Warner Bros. / "Catwoman")

What started out as a beloved animated series didn't really translate to the big screen. "The Last Airbender" cost Paramount $150 million to make, but it only earned $131 million at the U.S. box office. It's clear airbending may have been the only thing the film had going for it. (Video via Paramount Pictures / "The Last Airbender")

"A war has been waged in the shadows," said someone in the film "Elektra."

And maybe that's exactly where this "Daredevil" spinoff should've stayed. "Elektra" got weird fast, which translated to about $24 million at the domestic box office, although the film had a $43 million production budget. (Video via 20th Century Fox / "Elektra")

Okay, so we've tried doing a solo movie with the big green guy twice, and both times were unflattering takes on the popular Marvel character. In '03, with a budget of $137 million, "Hulk" only got a domestic return of $132 million. The next try in '08 actually did worse if you look at what it cost to make. With a $150 million budget, U.S. numbers only reached $134 million. (Video via Universal Pictures)

But the third time could be a charm. Maybe a third gamma radiated-reboot is just what the Hulk needs. If that’s a dud, too, we’ll be sure to amend our list.