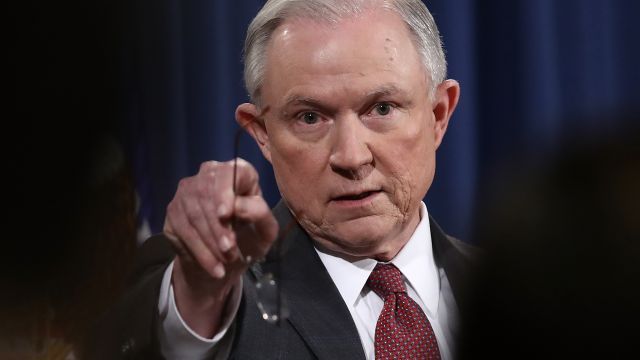 U.S. Attorney General Jeff Sessions claims he wants to push a '90s "tough-on-crime" program called Project Exile across the U.S. — but what is it?

"We need to enforce our laws; we will put bad people behind bars," Sessions said in Richmond, Virginia, on Wednesday.

Sessions called the plan "a very discreet, effective policy" and said he will "promote it nationwide."

So what is it?

Project Exile was first implemented in Richmond, Virginia, in 1997 to reduce violent crime. It shifts the prosecution of some illegal gun possession charges to federal court, which carries a mandatory five-year sentence and sends those convicted to federal prison, which is usually much farther away than state prison.

During a recent press conference, President Trump referenced the idea of "two Chicagos" when talking about the city's violence.

In Virginia, the program was particularly popular. One year after it went into effect in Richmond, the city saw a 32 percent drop in murders and more than 240 people were convicted in federal court. Subsequently, similar programs were implemented in Rochester, New York; Philadelphia, Pennsylvania; Atlanta, Georgia; and elsewhere.

And while Richmond undoubtedly had significant success during the program's first two years, experts are still torn on its effectiveness years later.

Two major research papers reached different conclusions: One claimed crime would have subsided anyway as part of a national trend, and the other said Project Exile played a significant role in reducing violent crime.

"I will send in what I have to send in, ... but you can't have those killings going on in Chicago," Donald Trump said during an interview with ABC. "Chicago is like a war zone."

Sessions met with Chicago Police Superintendent Eddie Johnson on Thursday, who has similarly called for tougher sentences for gun crimes in Illinois.

Nationally, violent crime is still at a historic low, but Sessions says he believes the uptick in homicides in some cities like Chicago is indicative of a larger trend that needs to be confronted.