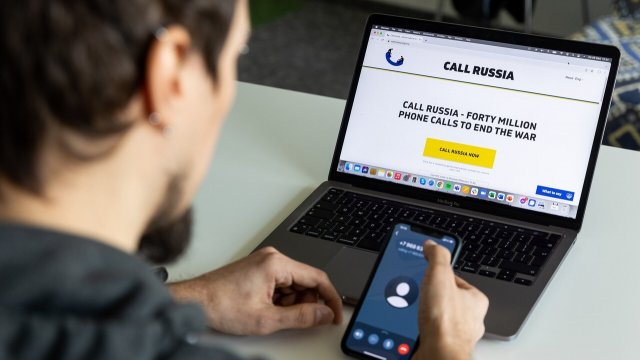 SMS
'Call Russia' Counters Kremlin Propaganda One Phone Call At A Time
By Ben Schamisso
By Ben Schamisso
April 12, 2022
A group of Lithuanian friends created a site to cold call Russian citizens and tell them what's really happening in Ukraine.

What if you could do your part to end the war in Ukraine — one phone call at a time?

It helps if, like Paulius Senūta, you speak Russian.

“I wanted to know about how much you know about what’s happening in Ukraine," Senūta said.

He and a group of friends in Lithuania created the “Call Russia” project last month to chip away at Kremlin propaganda.

“In a country like Russia where everything is banned, paradoxically, you get phone numbers of people online so we can download them and we can call them," Senūta said.

After downloading 40 million Russian numbers, he and his friends coded this new website.

A yellow button on the home page generates a random phone number of a Russian citizen.

Using the platform, Russian-speaking volunteers worldwide have already made over 125,000 calls.

NEWSY'S BEN SCHAMISSO: How can I counter Russian propaganda on my own? How do you recommend people go about those calls?

PAULIUS SENŪTA: What you should do is to try to tell people about the humanitarian catastrophe that's happening in Ukraine — people dying, children dying, cities just been demolished. They are human beings. They have human sympathies.

Evidence of atrocities committed by Russian troops in Ukraine is shocking the world. But at home, most Russians know little about it.

Russian President Vladimir Putin has criminalized any dissent or independent reporting about the war. It’s a crime to call the war a war. The Kremlin and state media call it a “special military operation.”

A Russian TV host said it's called this, "...when the main objective is peace. We don’t attack residential buildings; we don’t bomb peaceful civilians. We are forcing peace in Ukraine.”

Researchers estimate that two thirds of Russians approve of Putin’s actions in Ukraine.

But Senūta says if they knew the full story, they would be less supportive.

“When Germans lost the war and the German population discovered what Nazis were doing, they were appalled," Senūta said. "They couldn't believe it, right? Because again, they didn't know. The narrative was twisted and so forth. Exactly same thing here.”

You never know what you get when you call a random number, but according to Senūta, 25% of all volunteer calls have been quality conversations. However, one Russian woman recently told him she was Putin’s daughter.

“And she's like, ‘Daddy, there's this crazy Lithuanian calling, come here,'" Senūta said. "And I'm like, ‘Madam, why are you doing this? You know, I just want to talk with you about what is happening in Ukraine.' But she doesn't care about it, like ‘Daddy, daddy, daddy, come see the Lithuanian!’ So yes, that was a really freaky call.”

Freaky calls aside, Senūta says he and other volunteers are learning invaluable lessons about how to change brainwashed minds.

“We can't go the way like you've been wrong all your life, and I think we need to feed truth in packages," Senūta said. "You set up a mechanism that starts working by itself, where over a period of time, people will change their minds."

That’s what keeps Senūta going — the belief that even though it’s a long shot, changing enough Russians’ minds about the war could help stop it.