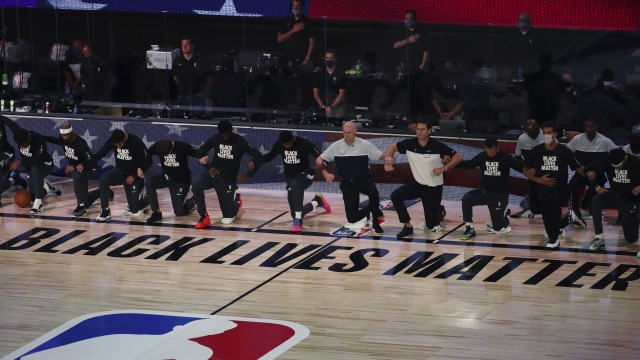 SMS
Professional Sports More Open About Social Justice Messaging
By Gage Jackson
By Gage Jackson
August 4, 2020
The NBA, WNBA, MLB and NFL are among some of the professional leagues highlighting social issues and encouraging players to take part.
SHOW TRANSCRIPT

Major sports are back with safeguards in hopes of preventing the spread of the coronavirus.

Some leagues ... having more success than others. Yeah, we're looking at you, baseball. But the abbreviated seasons look different even beyond the new COVID-19 rules.

The push for social justice in sports is more apparent than ever. In the NBA, Black Lives Matter is painted on the court, kneeling is a pre-game ritual and players sport jerseys that swap out their last names for messages like "I Can't Breathe," and "I Am A Man" and other phrases commonly associated with racial protest.

The WNBA, MLB and NHL are among other professional sports leagues highlighting social justice movements.

The WNBA has agreed to form a platform called The Justice Movement where players and teams can promote the Black Lives Matter movement, among others. Players are also allowed to wear jerseys with the names of women who have died in connection to police brutality or racial violence, such as Breonna Taylor and Sandra Bland.

As for the NFL, the 2020 season isn't here quite yet but the league is already taking steps to reverse previous rules against player protests and kneeling for the national anthem. Teams and players are now encouraged to express their beliefs without fear of repercussion from the league. And look for social justice messages on the back of helmets this year.