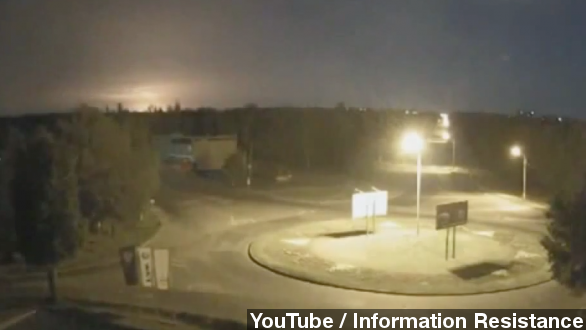 By Elizabeth Hagedorn
June 14, 2014
Anti-aircraft missiles reportedly downed the aircraft just before it was about to land at an airport in Luhansk. All 49 people on board died.
SHOW TRANSCRIPT

Saturday marked the biggest single loss suffered by Ukraine's military since the unrest in the country's east began.

The Ukrainian Defense Ministry is accusing pro-Russian separatists of shooting down a Ukrainian military plane — killing all 49 people on board. Anti-aircraft missiles reportedly downed the aircraft just before it was about to land at an airport in Luhansk. (Via YouTube / Information Resistance)

“Video has emerged of what appears to be fire bombs dropped on the city … Despite the video reports, Kiev is denying such weapons have been used.”

On the other hand, the U.S. State Department is accusing Russia of sending heavy military equipment, including tanks, to the rebels fighting in eastern Ukraine. (Via YouTube / Dmytro Zgonnik)

Despite calls for peace from Ukraine's new president, Luhansk and neighboring cities have seen fierce fighting from both sides — putting them at the center Kiev's so-called “anti-terrorist operation."

Of this latest incident, the BBC’s David Stern writes: “The chances for peace in Ukraine's east still exist. But with every major incident like the one in Luhansk on Saturday morning, they seem to recede even further into the distance.”

Those other incidents include several Ukrainian military aircraft shot down in recent weeks. Most recently, separatists claimed to have downed a government surveillance plane over Slaviansk. (Via ​Ukraine News One, YouTube / Novosti 24)