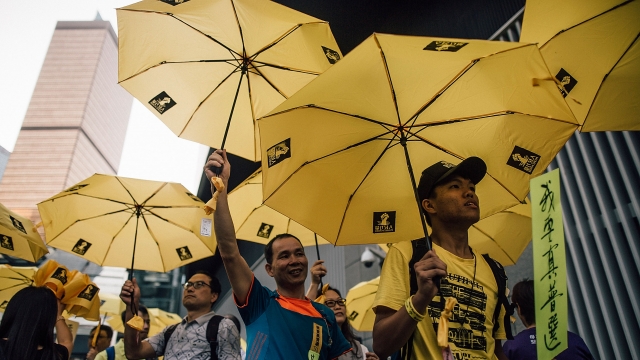 The choice in candidates has been seen as a message to Beijing that independence from China's central government is still on the city's mind.

One of several young candidates elected was 23-year-old Nathan Law, who pushed for self-determination during the "Umbrella Protests" in 2014.

It was especially difficult for any pro-independence candidate to win because the Chinese government forced all candidates to sign a pledge accepting that Hong Kong belonged to China. Six candidates were disqualified for their beliefs.

The U.K. gave up Hong Kong to China in 1997. Under the "one country, two systems" model, Hong Kong is supposed to keep its capitalist economy and more democratic system until 2047, but the central Chinese government has been known to flex its muscles.

Last winter, Chinese security abducted five men in Hong Kong who published books against members of the central government. Teachers in the city can lose their qualifications if they push for independence in the classroom.

Because of the success of pro-independence candidates, some fear China will only crack down even harder. The central government has reportedly likened pro-independence Hong Kongers to separatists in Tibet and Taiwan.

Thoughts of independence aren't dying out, but the movement still has a way to go. A study two months ago found 17 percent of inhabitants want independence when the "two systems" model ends.