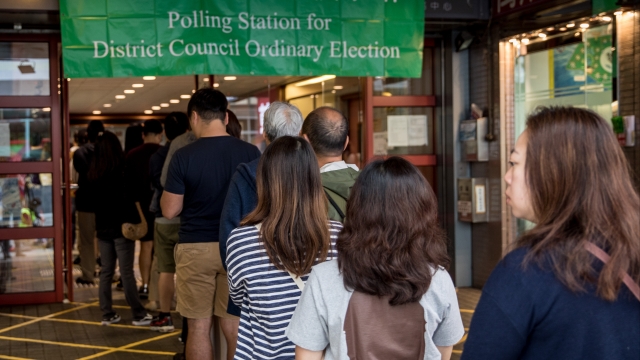 This was the first election held in Hong Kong since anti-government protests began earlier this year.

This was the first election held in Hong Kong since anti-government protests began earlier this year. So analysts viewed it largely as a test of support for the city's leader Carrie Lam.

More than 71% of registered voters showed up at the polls. The Guardian says a large number of them were first-time voters.

Prior to the election, pro-Beijing lawmakers controlled all 18 district councils. But they only ended up holding onto roughly 13% of the 452 seats that were up for grabs.

Following the election, Lam said her government respected the results. She also noted that going forward it would "listen ... humbly" to the public's opinion and "seriously reflect."

China took a less civil tone in its response. While in Japan on Monday, China's Foreign Minister said, "Any attempt to mess up Hong Kong, or even damage its prosperity and stability, will not succeed."