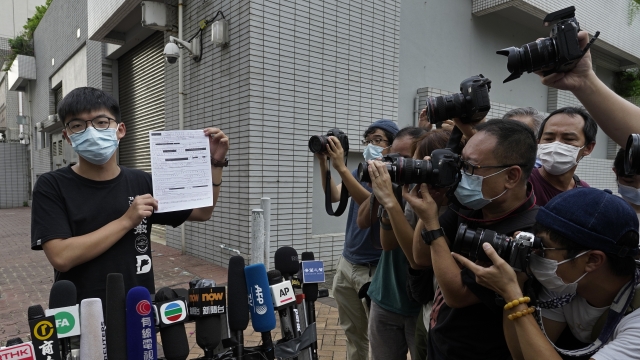 SMS
Pro-Democracy Activist Joshua Wong Arrested By Hong Kong Police
By Gage Jackson
By Gage Jackson
September 24, 2020
The pro-democracy activist was charged with attending an illegal demonstration in 2019 and wearing a face mask during the protest.
SHOW TRANSCRIPT

His social media accounts said he was accused of participating in an unauthorized assembly last year and violating a pre-coronavirus law that banned people from wearing face masks in public – which was already common practice in the Chinese territory prior to the pandemic.

He and many other activists have been arrested numerous times for various charges that were relatively minor offenses related to political speech and assemblies.

Wong told reporters in Hong Kong this was the third case he's faced since he was released from prison last June. But Wong said, quote, “No matter what happens, I will still continue to resist.”