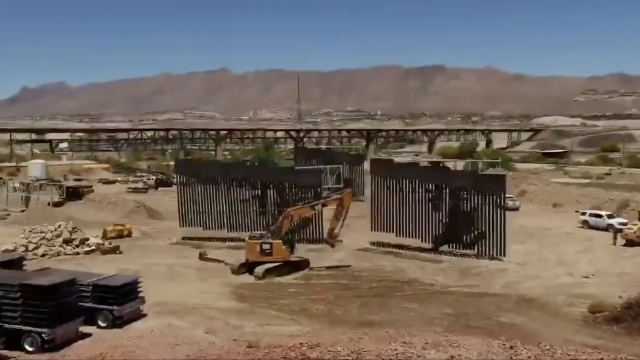 SMS
Private Group Building Border Wall In New Mexico Ordered To Stop
By Katie Cammarata
By Katie Cammarata
May 29, 2019
We Build the Wall has raised over $22 million through a GoFundMe campaign to build portions of wall to fill in gaps in the current barrier.
SHOW TRANSCRIPT

A New Mexico mayor says a private group that started building part of a U.S.-Mexico border wall has been ordered to stop.

The group — named "We Build the Wall" — started building the "structure without authority or any building permits from the city," according to a spokesperson for the city of Sunland Park.

Mayor Javier Perea told a local news outlet that the owner of the land where the wall was to be built submitted paperwork for a permit before the group started construction, but that paperwork wasn't complete and a cease-and-desist order was filed.

We Build the Wall has raised over $22 million since December through a GoFundMe campaign to build portions of wall to fill in gaps in the current barrier.

Kris Kobach — a spokesman for We Build the Wall and former Kansas secretary of state — said city officials gave the group the "all-clear." Perea disputed that statement.