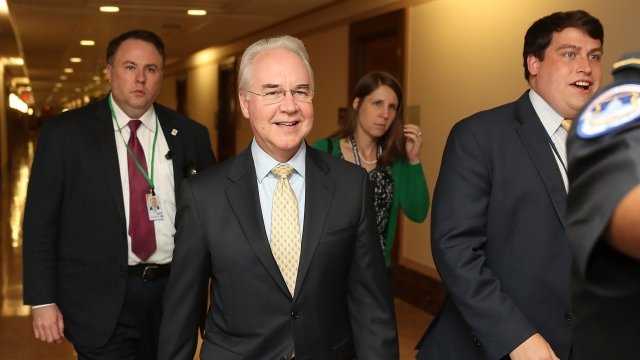 SMS
Price's Travel Scandal Puts A Spotlight On These Other Cabinet Members
By Matt Picht
By Matt Picht
September 29, 2017
After former HHS Secretary Tom Price's resignation, the rest of President Trump's Cabinet is under scrutiny for their travel.
SHOW TRANSCRIPT

President Trump's former Health and Human Services Secretary Tom Price has resigned following a scandal about his travel bills. Now, several other Cabinet members are reckoning with negative press about their own expense accounts.

Treasury Secretary Steve Mnuchin was already in hot water over a previous trip to Fort Knox. But after flying to New York for Trump's big infrastructure speech, Mnuchin took an Air Force C-37 jet back to D.C. The flight spent less than an hour in the air. Taxpayers spent at least $25,000 on it.

Environmental Protection Agency Administrator Scott Pruitt racked up an over $58,000 travel bill on four private flights since mid-February. His department says Pruitt usually travels commercially and only took private flights when there wasn't a viable alternative. 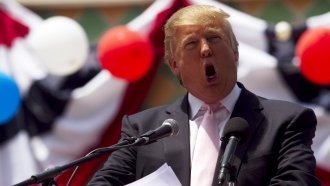 Trump's Tax Plan Does Some Major Favors For Rich Americans

Secretary of the Interior Ryan Zinke offered a similar defense for his private travel, which reportedly included a $12,000 flight from Las Vegas to his home state of Montana. Zinke says his travel was cleared by his department's ethics office, calling the reports "a little BS."

And Veterans Affairs Secretary David Shulkin did at least fly commercial during a work trip to Europe in July. But The Washington Post notes Shulkin and his wife spent about half of the trip sightseeing — and the government paid for his wife's travel and food bills, too.

There's no indication any of this travel broke any formal rules or guidelines; agencies aren't banned from paying for chartered flights, they simply have to report them to the General Services Administration.

But the pricey flights don't mesh well with Trump's past attempts to cut out wasteful government spending. Zinke and Pruitt in particular have both supported steep budget cuts for their agencies.