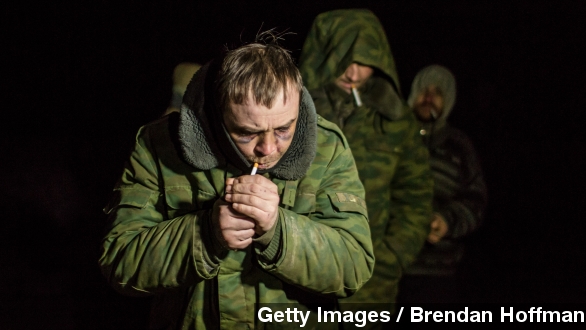 A week after Ukrainian President Petro Poroshenko ordered an agreed cease-fire into effect, it looks like one key part of the deal might finally be materializing.

Both sides were supposed to withdraw heavy weapons some 30 miles back from the front lines, but both sides have been reluctant to do so this past week. (Video via Radio Free Europe/Radio Liberty)

That's partially down to fighting over the railway hub town of Debaltseve, where shelling has continued despite the cease-fire. (Video via International Business Times)

But now, Sky News reports, on the back of a prisoner exchange Saturday night, a Ukrainian military official confirmed the country's forces have started their withdrawal of heavy weapons.

It's not immediately clear if the separatist rebels will uphold their side of the agreement, and Ukraine and its allies have accused them of picking and choosing parts of the agreement to follow. (Video via RT)

"So far, Russia and the separatists are only complying in a few areas, selectively," said U.S. Secretary of State John Kerry. "Not in Debaltseve, not outside Mariupol, and not in other key strategic areas."

Ukrainian military officials say that second city, Mariupol, could be the rebels' next target, as they look to link Crimea with rebel strongholds in Donetsk and Luhansk. (Video via Google)

Observers from the Organization for Security and Co-operation in Europe say they haven't been able to properly monitor the implementation of the peace deal because of continued fighting. (Video via Euronews)

So far, the conflict in Ukraine has left more than 5,400 people dead, another 12,000 wounded and more than 5 million displaced.