Print It: 3-D Printing Has Hit The Mainstream 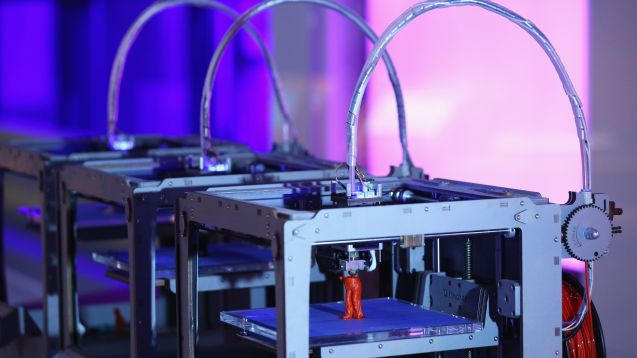 SMS
Print It: 3-D Printing Has Hit The Mainstream
By Eugene Daniels
By Eugene Daniels
June 26, 2015
3-D printing has is finally hitting the mainstream, but what does that mean for the rest of us?
SHOW TRANSCRIPT

"This is the Ripple Maker. Your Ripple Maker can customize coffee with high quality images in just a few seconds," a spokeswoman for Coffee Ripples said.

A brand new tool for your neighborhood barista is using 3-D printing to bring some fun to your morning pick-me-up.

The company told 3Dprint.com it wants to "add meaning, depth and joy to the coffee experience" by allowing users to print anything they can think of on top of their cup of joe.

This growing wave of mainstream 3-D printing technology took nearly three decades to get here. The first patent was issued in 1986.

Now, companies are using the technology to print shoes, glasses and even human organs. The UK has invested 100 million Euros into research to 3-D print aircraft components. (Video via Netflix)

And 3-D printing is finally past that after almost 30 years. A 2014 survey found two-thirds of the 100 industrial companies questioned use 3-D printing.

One reason 3-D printing is so revolutionary is its additive process. Instead of traditional manufacturing where producers take raw material and cut away at it until they have what they want, 3D printing starts from scratch and produces far less waste. (Video via Creative Tools)

Website TechRepublic says you also may be able to keep products longer because instead of having to throw the whole product away, you or a company can just print the part that has stopped working.

3-D printing also allows for more niche businesses to enter the business world because of low overhead when entering the marketplace.

But it's not all good news.

In a report on disruptive technologies by McKinsey and Company, the research firm found 3-D printing presents new legal challenges.

Take for example the fact you can go on a website and print off free designs from around the world. Those designs could just be a ripoff of something with intellectual property protection.

But forget about the business world, what about the average consumer?

The good thing about the increased interest in the world of 3-D printing is that more affordable printers are entering the market.

Thanks to a 3-D printer featured on Kickstarter, you can order one for just around 400 bucks.

And with big companies like GE, Apple and Ford behind it, the technology is here to stay, which probably isn't a bad thing, especially if you fancy a face in your morning cup.