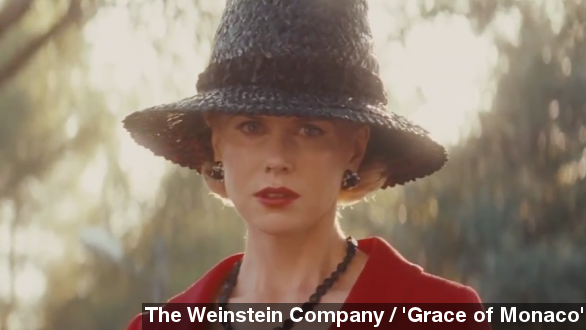 By Lauren Zima
May 14, 2014
The controversial new movie "Grace of Monaco" is opening the prestigious Cannes Film Festival, but Princess Grace's children are none too happy.
SHOW TRANSCRIPT

The controversial Grace Kelly biopic "Grace of Monaco" opens the Cannes Film Festival in France Wednesday, but her children will not be in attendance.

The movie is set in the '60s and depicts a tumultuous relationship between Kelly and the man she left Hollywood for, Prince Rainier III. The pair's son, Prince Albert, is said to be upset about the way both of his parents are portrayed. (Via The Weinstein Company / "Grace of Monaco")

In January Monaco's royals declared, "​We have had absolutely no association with this project which ... claims to be about the lives of our parents." ​(Via The Australian Women's Weekly)

They also said the movie "pointlessly" glamorized their mother's life and contained historical inaccuracies and "pure fiction." (Via Daily Express)

And earlier this week Princess Stephanie, Grace and Rainier's youngest daughter, said the movie should "never have been made" and does not do justice to the great man her father was. (Via The Monaco Times)

For her part, star Nicole Kidman told the Daily Mail the movie is only meant to show a sliver of Princess Grace's life and that she understands why her children want to protect their mother.

The movie itself has met major problems, with the director and U.S. distributor Harvey Weinstein clashing over edits. As The Hollywood Reporter noted in October, it was originally scheduled for a fall release but was pushed to spring.

Then, Variety reported Weinstein was considering dropping U.S. distribution rights entirely just weeks ago because he was so unsatisfied with the movie.

Just Wednesday, the day of the premiere at Cannes, a new deal was negotiated — with Weinstein paying less money up front. (Via Variety)

There's no critical consensus on the movie yet, but the BBC reports early reviews from Cannes are, well, terrible, with some calling the movie both laughable and boring. (Via Rotten Tomatoes)