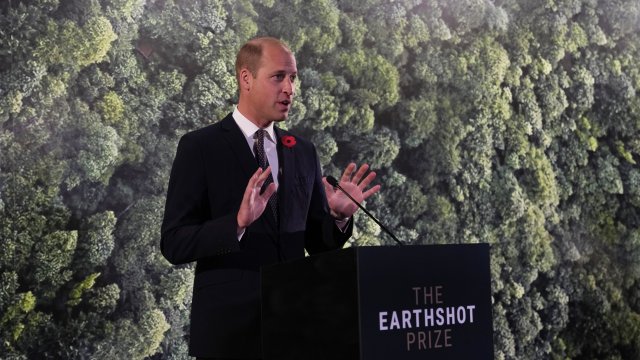 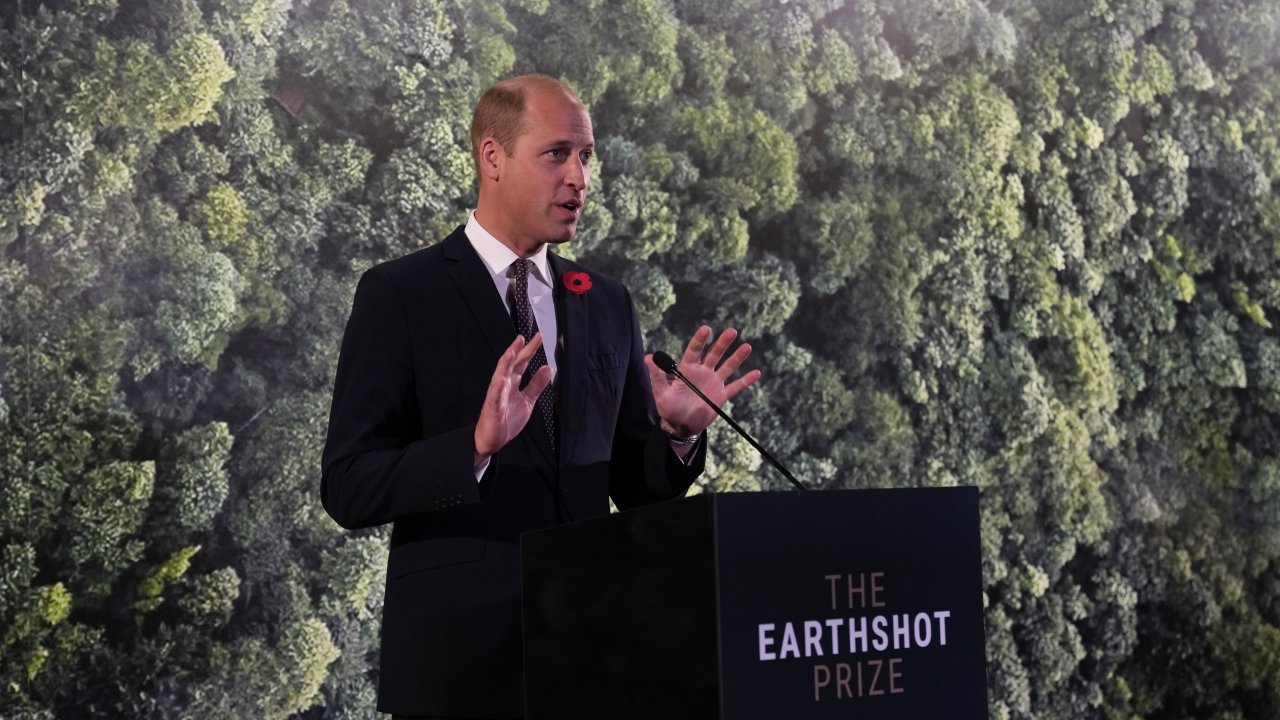 The conservation charity founded by Prince William, second in line to the British throne and who launched the Earthshot Prize, keeps its investments in a bank that is one of the world's biggest backers of fossil fuels, The Associated Press has learned.

The Royal Foundation also places more than half of its investments in a fund advertised as green that owns shares in large food companies that buy palm oil from companies linked to deforestation.

"The earth is at a tipping point and we face a stark choice," the prince, a well-known environmentalist, is quoted saying on the websites of the Earthshot Prize and Royal Foundation.

Yet in 2021, the charity kept more than $1.3 million with JPMorgan Chase, according to the most recent filings, and still invests with the corporation today. The foundation also held $2 million in a fund run by British firm Cazenove Capital Management, according to the 2021 filing. As with JPMorgan, it still keeps funds with Cazenove, which in May had securities linked to deforestation through their use of palm oil. The foundation invested similar amounts in both funds in 2020, its older filings show. As of December 2021, the charity also held more than $12.1 million in cash.

The investments, which the Royal Foundation didn't dispute when contacted by the AP, come as top scientists repeatedly warn that the world must shift away from fossil fuels to sharply reduce emissions and avoid more and increasingly intense extreme weather events.

Financial experts say investments like those of the foundation can be blind spots for charities and philanthropies. As climate change is an increasing area of attention for foundations and others, organizations have sometimes struggled to recognize where their own investments lie and align them with more environmentally friendly choices, despite growing numbers of ways to steer clear of funds linked to fossil fuels.

Like the Royal Foundation, in recent years other foundations, including high profile British charities like the National Trust and Wellcome Trust, also have faced criticism for investments with strong connections to fossil fuels or environmentally harmful practices. Microsoft co-founder and philanthropist Bill Gates announced that he divested his foundation's direct oil and gas holdings in 2019.

Charities that are talking the talk "also need to walk the walk," said Andreas Hoepner, professor of Operational Risk, Banking and Finance at University College Dublin, who helped design several European Union climate benchmarks and has sat on its sustainable finance group.

"There are funds that are more sustainably oriented," Hoepner added, pointing to a dozen alternatives to the JPMorgan product that are marketed as sustainable.

There are also alternatives to Cazenove's sustainability fund. For example, funds manager CCLA caters to churches and charities and does not invest in businesses that get more than 10% of their revenue from oil and gas. Another option is Generation Investment Management, founded in part by former U.S. Vice President Al Gore.

The Royal Foundation said by email that it had followed Church of England guidelines on ethical investment since 2015, and goes beyond them.

"We take our investment policies extremely seriously and review them regularly," the statement said.

The foundation said management fees paid to JPMorgan were small, but declined to provide a figure.

It's not clear what role, if any, Prince William had in investment decisions, as he did not respond to AP requests for comment. JPMorgan Asset Management in an email declined to comment on questions about charities investing in their products despite its record of financing fossil fuels.

Bloomberg data show JPMorgan has underwritten more bonds and loans for the fossil fuel industry and earned greater fees than its competitors in the five years up to 2021.

Environmental NGO Rainforest Action Network looked at direct loans and stock ownership along with bonds and estimated that between 2016 and 2021, JPMorgan's banking arm financed fossil fuel companies with some $382 billion. This was more than any other bank.

As one of the world's biggest banks, JPMorgan is also a leading financier of green projects, and has set a target of investing $1 trillion in these over the next decade. However, it made about $985 million in revenue from fossil fuels compared to $310 million from green projects since the Paris Agreement in 2015, about three times more, according to Bloomberg Data.

Compared to some other charities, the Royal Foundation's investments are small, with little impact on climate change. But they are not in line with the ethos of the foundation, which lists conservation and mental health as main points of emphasis, or Prince William's public statements. His Earthshot Prize, a "global search for solutions to save our planet," awards grants of up  to $1.2 million each year to projects confronting environmental challenges, according to the charity's website, which suggests banks as among potential recipients. In July, the Royal Foundation announced that the Earthshot Prize had become an independent charity and Prince William would be its president.

Through launching and awarding the prize and in other public appearances, Prince William has been outspoken on the environment for years. He has argued that entrepreneurs should focus their energies on saving the Earth before investing in space tourism, encouraged parents to consider how their children don't have the same outdoor opportunities they had and urged conservation.

"Today, in 2022, as the queen celebrates her Platinum Jubilee, the pressing need to protect and restore our planet has never been more urgent," the prince said in June during Queen Elizabeth II's Platinum Jubilee.

While the Cazenove fund is marketed as "sustainable," as of May 31 the fund held almost $6 million of shares in Nestlé, and shares worth $8.1 million in Reckitt Benckiser, according to Morningstar Direct data. Both Nestlé and Reckitt Benckiser have faced controversy over their palm oil supply. Clearing rainforests to make way for palm oil plantations is one of Southeast Asia's biggest drivers of deforestation.

Nestlé is the world's largest food and beverage manufacturer, while Reckitt manufactures popular U.S. brands including Lysol and Woolite, and Vanish and Dettol, familiar in the U.K.

A 2021 investigation by the environmental NGO Global Witness said both companies were sourcing palm oil via intermediaries from illegally deforested areas in Papua New Guinea. The plantations responsible were also accused of corruption, use of child labor and paying police to attack protesters.

Another 2021 report, by sustainability analysts Chain Reaction Research, said both companies purchased palm oil from an Indonesian firm that has an affiliated mining project accused of deforestation in an orangutan habitat.

An investigation in 2020 by Chain Reaction Research found that more than 1,235 acres — over 1,000 American football fields — of rainforest in Indonesia's Papua province were felled by a supplier to Wilmar, a giant food and oils producer, from which both source their palm oil.

David Croft, head of sustainability at Reckitt, said no tainted palm oil entered its products from the Papua New Guinea properties, while conceding their mills were previously in its supplier list. An intermediary company linked Reckitt to the Indonesian mining conglomerate in its supply chain, he said, and it was investigating. Croft said they have had "active discussions" with Wilmar, which stopped sourcing from the Papua plantation in January 2022. In a public statement published in response to Chain Reaction's investigation, Wilmar disputed the cleared area was high conservation value forest.

Despite being a "relatively small user of palm oil," Reckitt knows there is more to do, said Croft, and is accelerating its progress. Croft said Reckitt could not get all the product it needs from certified producers before 2026.

Emma Keller, head of sustainability at Nestlé U.K. and Ireland, said the Wilmar case was to be investigated. Nestlé engages with suppliers that fall short to help them change and monitors performance, she said.

Sixty percent of Nestlé's palm oil supply was certified as sustainable by the Roundtable on Sustainable Palm Oil, an industry-organized effort, in 2021, according to the World Wide Fund for Nature. For Reckitt, that figure was 15.3%.

Keller said that by winter 2021, more than 90% of Nestlé palm oil was deforestation-free and it will achieve zero-deforestation status by the end of 2022. It uses supply chain maps, on-the-ground verification and satellite monitoring for verification. Nestlé was moving toward "a model for conserving and restoring the world's forests," Keller said.

Lily Tomson, of the responsible investment charity ShareAction, said Cazenove had shown some leadership on sustainable investing, but there "remain areas charities such as the Royal Foundation can push them on."

Investors can vote on key environmental issues in companies where they hold shares, for example setting targets to align with the Paris Agreement, or on climate lobbying. Yet Cazenove's parent company, Schroders, voted against 22% of environmental resolutions last year, ShareAction research has found.

Kate Rogers, head of sustainability at Cazenove Capital, said the company engaged with Nestlé and Reckitt, and has seen progress on deforestation.

Environmental factors are ingrained in the company's decision-making, she said, every investment assessed for sustainability. Cazenove has committed to eliminating commodity-driven deforestation from its investments by 2025 and said a new voting policy meant that as of June 2022, the firm had voted against 60 directors of companies it invests in over a lack of climate action.

Dr. Raj Thamotheram, former head of responsible investing at both a $109 billion British university pension fund and AXA Investment Managers, said foundations should be better regulated, with annual reports made to detail how well their investment strategy aligns with their mission.

Thamotheram, now an independent adviser, called unsustainable investments a "cultural and governance blind spot of huge proportions," and said they were endemic in the charity sector.

"It's the status quo approach and it needs shaking up," he said.