Prince's 'Piano & A Microphone 1983' Is A Rare Posthumous Release 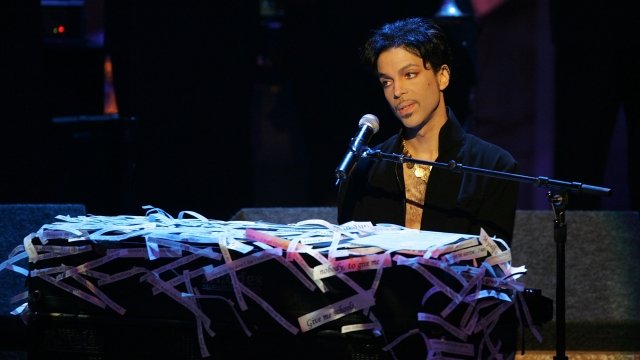 SMS
Prince's 'Piano & A Microphone 1983' Is A Rare Posthumous Release
By Christian Bryant
By Christian Bryant
June 8, 2018
The upcoming release is one of the few works approved by the Prince estate since the musician's death in 2016.
SHOW TRANSCRIPT

Previously unreleased Prince music is on the way, and it's bound to be one of the rarest works since the musician's death in 2016.

Prince's estate announced plans to drop a nine-track LP called "Piano & A Microphone 1983." The estate made the announcement on what would've been the musician's 60th birthday.

The recordings happened just a month before Prince began filming for "Purple Rain," which was a box office success and won an Academy Award for best original song score.

Estate adviser Troy Carter said in a statement, "The Estate is excited to be able to give fans a glimpse of his evolution and show how his career ultimately came full circle with just him and his piano."

Carter describes the upcoming release as "raw." You can hear that in the first single from the LP, a blues interpretation of the spiritual "Mary, Don't You Weep." It's imperfect and intimate — the track warbles, and you can hear Prince sniffling as he plays the keys.

But the rarity of "Piano & A Microphone" goes beyond just how stripped-down it is.

For one, Prince was protective of his work. His estate has followed up by suing others who've attempted to release his work without the estate's permission. "Piano & A Microphone" is one of the only estate-approved releases since Prince's death in 2016.

Secondly, this particular release was already known to bootleggers as "Intimate Moments With Prince." Its official release will likely be a big deal for some of Prince's die-hard fans.

While some have questioned whether Prince ever intended for us to hear his unreleased music, Carter told Variety that the artist "left a blueprint of how things should go."