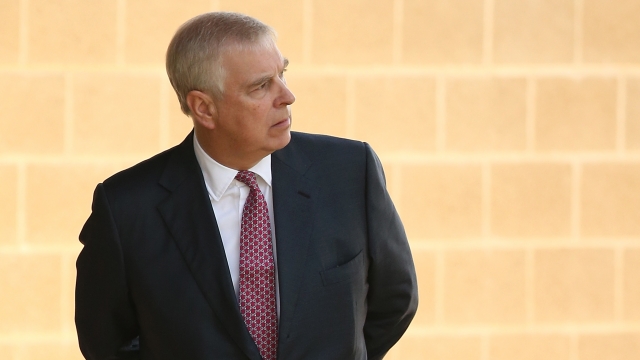 SMS
U.K.'s Prince Andrew To 'Step Back' From Royal Duties
By Ahmed Jawadi
By Ahmed Jawadi
November 20, 2019
​The Duke of York said ​he's asked Queen Elizabeth II to let him "step back from public duties for the foreseeable future."
SHOW TRANSCRIPT

Prince Andrew is stepping back from his royal duties amid scrutiny of his previous relationship with convicted sex offender Jeffrey Epstein.

The Duke of York said in a statement Wednesday: "The circumstances relating to my former association with Jeffrey Epstein has become a major disruption to my family's work and the valuable work going on in the many organizations and charities that I am proud to support." As such, he said Queen Elizabeth II has granted his request to "step back from public duties for the foreseeable future."

The prince's statement follows widespread backlash over his interview with the BBC last week. Although Andrew maintained during the interview that he and Epstein "weren't that close," he said their relationship still came with "some seriously beneficial outcomes."

One of Epstein's accusers alleged in a 2015 court filing that Epstein forced her to have sex with men including Prince Andrew while she was a minor. Andrew told the BBC he "has no recollection" of the woman and denied that they'd ever met. He also said he "has absolutely no memory" of a photo appearing to show him with his hand around the accuser's waist back in 2001. He acknowledged that it was him in the picture, but suggested that the photo may have been doctored.

Andrew was also questioned about why he'd stayed at Epstein's house in New York just months after Epstein's release from jail in 2010. He said he'd visited Epstein because he wanted to cut ties with the American financier in person, but wound up staying at Epstein's place for a few days because "it was a convenient place to stay." He did admit that in hindsight, "it was definitely the wrong thing to do."

The prince said in Wednesday's statement that he was willing to help "any appropriate law enforcement agency" with investigations, if asked. He also wrote: "I continue to unequivocally regret my ill-judged association with Jeffrey Epstein. His suicide has left many unanswered questions, particularly for his victims, and I deeply sympathize with everyone who has been affected and wants some form of closure. I can only hope that, in time, they will be able to rebuild their lives."