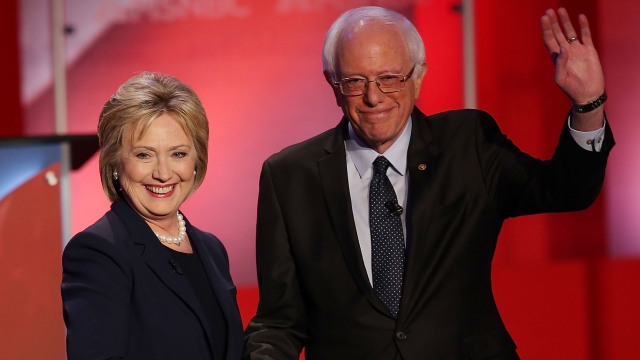 SMS
Primary Season Ends In DC With Both Clinton And Sanders Moving Forward
By Eugene Daniels
By Eugene Daniels
June 14, 2016
The candidates were expected to meet Tuesday night, likely to discuss unity and the party platform.
SHOW TRANSCRIPT

Being the last voting contest is a huge bummer for D.C. and its 20 pledged delegates because the decision has already been made. Clinton hit the requisite number to clinch the nomination more than a week ago. And Clinton's win in the District was obvious from the start. Demographically, D.C. was basically made for her.

To make it crystal clear everyone has moved on, Clinton and her rival Bernie Sanders were expected to sit down Tuesday evening for their first meeting since the campaign began.

Both candidates are in a tough spot. Sanders still hasn't conceded but looks to be winding down his campaign. He reportedly planned to lay off at least half his campaign staff but still wants to make sure he can influence the party platform.

Clinton, on the other hand, has to make sure she treads lightly and doesn't push Sanders out of the process too fast in her rush to shift focus to the general election. That perception could definitely alienate some Sanders supporters, and she needs a vast majority of them in November.

Clinton, Sanders and their respective campaigns will probably continue to meet and hash out the party's platform, which will likely be more progressive than Clinton originally planned. Negotiations might also touch on the primary process overall, with superdelegates and more open state primaries up for debate.

And an endorsement doesn't look like it's that far off. On "Meet the Press," Sanders said: "After we have that kind of discussion and after we can determine whether or not we are going to have a strong and progressive platform, I will be able to make other decisions."