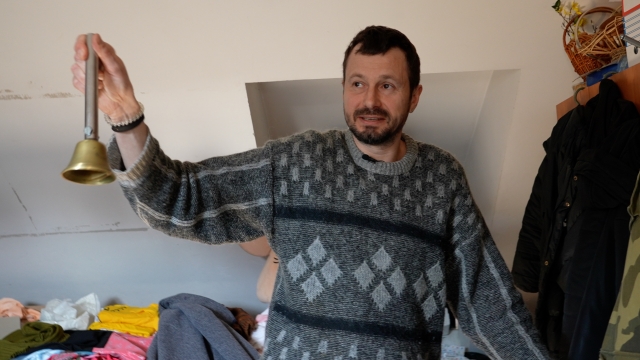 SMS
Pride Month Holds New Weight For LGBTQ Ukrainians
By Jason Bellini
By Jason Bellini
June 15, 2022
Ukrainian activist and LGBTQ activist Denys Kratt has made Lviv, Ukraine his home away from home amid the Russian invasion.

A narrow hallway, a staircase and a sanctuary.

Three months ago in Lviv, right after the start of the Russian invasion, Newsy met Ukrainian LGBTQ activist, Denys Kratt. Lviv was his home away from home.

"I don't put away everything from my luggage because I hope tomorrow they say, 'Denys, come home. It's possible now,'" he said. "Yesterday we refuged two gay people from Kyiv."

In a restaurant-turned-safehouse, Denys helped friends, friends of friends, even strangers as they escaped the ravages of war.

As President Vladimir Putin's troops tried and failed to take the capital, Kyiv, people who were "out" had all the more reason to get out. Western intelligence reports indicated LGBTQ activists throughout the country were on secret Russian hit lists.

In the chill of winter, the war created an LGBTQ diaspora.

For example, Newsy met Marina Hertz and her girlfriend as they were getting help from Denys to get to Poland.

"I'm from Kiev," Hertz said. "We're going to Germany — to our community, our friends."

NEWSY'S JASON BELLINI: You think they would go after gay people?

VADYN SAVESCU: Yes. Yes. If there is no proper police force and no, you know, rule of law — just Russian occupation troops, some people would just go after us.

DENYS KRATT: It's a very dangerous mix for me, being an LGBT [member] and an activist for Ukraine. It's so dangerous for me being under the Russian occupation.

From March to June, so much has changed in Ukraine. With Russia focusing its military aggression on the east of the country, Kyiv and other cities are no longer in Putin's crosshairs. Newsy checked back in with Denys to get his perspective on where the LGBTQ community is at now.

Denys spoke to Newsy from Germany, where he was visiting his parents who left their home in Kharkiv, which the Russians later destroyed. He'll be going back to Lviv in a few weeks.

BELLINI: Are you still living in the same restaurant?

The restaurant, however, is no longer a safe house. Other than for him and his partner, it's open for business again.

But most of the friends he helped to leave the country have not returned.

But a new opinion poll finds that support in Ukraine for equal rights for LGBTQ people has doubled since before the war.

"Of course people understand that many LGBT make fighting for this Russian occupied troops," Kratt said. "Three weeks ago, one man died near Kharkiv on the front line."

Kratt is referring to news the Kyiv Pride Organization posted on June 4, that one of its members died in battle.

Our conversation back in March foreshadowed the current situation, one in which some world leaders are suggesting Ukraine may need to negotiate with Russia, trading land for peace.

BELLINI: Why would it be so bad if Russia took part of the country?

KRATT: Not good? Not good. It's your life completely destroyed in this moment.

BELLINI: Do you have hope for Ukraine?

KRATT: Of course, I hope, but I think [the] situation [will] stay like this for [a] long time.

An indefinite future of sleeping on a mattress in a city not his own, his fellow activists scattered about the world and the day he dreams of, sometime far on the horizon. 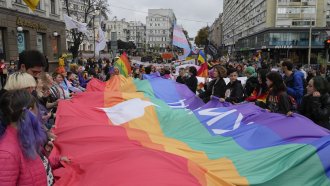