Someone Has Taken The Blame For That Oscars Best Picture Fiasco 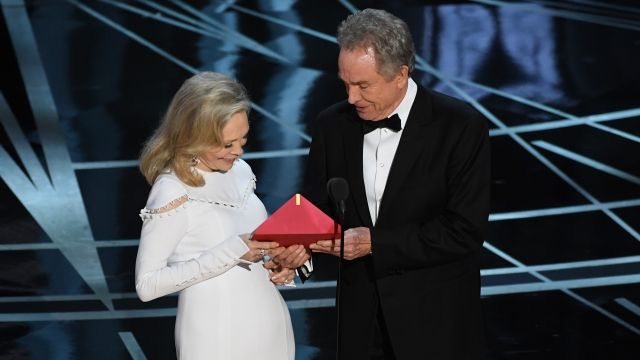 PricewaterhouseCoopers, the accounting firm responsible for overseeing the Academy Awards' voting process, has taken the blame for the mix-up.

Looks like we have an explanation for the now-infamous Oscars Best Picture snafu. And no, it wasn't Warren Beatty's fault.

PricewaterhouseCoopers, the accounting firm responsible for overseeing the Academy Awards' voting process, has taken the blame for the shocking mix-up.

Somehow, Beatty was handed the envelope for Best Actress before going on stage, not the one for Best Picture.

Only two people know the Oscar winners in advance, and they're both with PricewaterhouseCoopers.

After the votes are tallied, they stuff two identical sets of envelopes and lock them in two separate briefcases. And on Oscars night, they stand backstage and hand the envelopes to award presenters before they walk out on stage.

Typically, this process is pretty foolproof. But apparently not this year.

And that's why "La La Land" was mistakenly announced as the winner of Best Picture and not "Moonlight."

PricewaterhouseCoopers said in a statement after the show they "deeply regret that this occurred" and are still trying to figure out exactly how it could have happened.