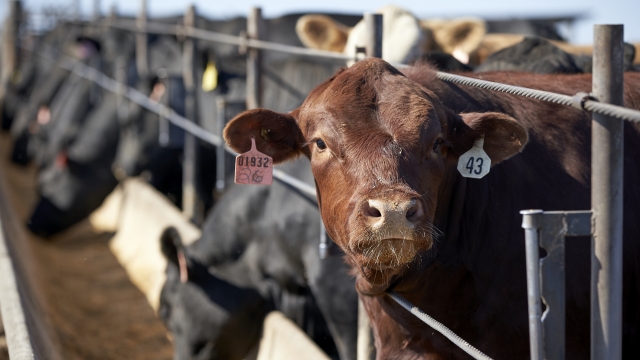 The beef industry has been using this slogan for decades: "Beef. It's what's for dinner." But the price of beef is getting a little harder to swallow these days.

Richmond, Virginia, shopper Jeremiah White is finding his food budget being squeezed at his local market, including by the high cost of meat.

"The prices just got outrageous. It looks like every week it goes up and up," he said. "After you pay your mortgage… and you have to have money for gas… and then when you come to the grocery store... You try to have what you need to get."

According to the Consumer Price Index, the price of beef is up nearly 21% from last year. Analysts note higher costs for fuel, fertilizer and feed related to the war in Ukraine.

As the guys are producing cattle, obviously, those costs are going up, the break-even cost on said animal is a lot higher. So, you're gonna see those prices go up on your grocery store," he said. "It's been a rough two and a half years on everybody."

At Arthur Bryant's, a sign greets customers explaining what's causing the rise in prices and encourages them to order anything other than beef.

Suzanne Turner, who stopped by with family visiting from Texas, is floored by how much she's paying for meat at the grocery store.

"You go in looking at a roast, wasn't even six months ago, [compared] to how it is today and you're like, 'What happened?'" Turner said.

Meat prices are getting so high, industry CEOs were called before Congress.

House Agriculture Committee Chair David Scott of Georgia and others criticized big meat packers for their soaring profits in recent months while the Biden administration has accused them of pandemic profiteering.

"Virtually, every input in the supply chain has gone up. And typically, when you see a minor increase companies tend to absorb that. But the rate of inflation and cost have gone up so dramatically some of that ultimately had to be passed on to the consumer," said CEO of Tyson Foods Donnie King.

Back in Virginia, meat manager Kelvin Carter recognizes the struggle but he says the store has to pay more to its distributors.

"It's pretty much nothing we can do about it than to offer our customers the best price possible," he said.

Industry reports show these days, when price-sensitive shoppers are figuring out what's for dinner, it's less fresh meat and more frozen and canned foods.