Formerly Deported Vet Attends State Of The Union For 'Voiceless Ones' 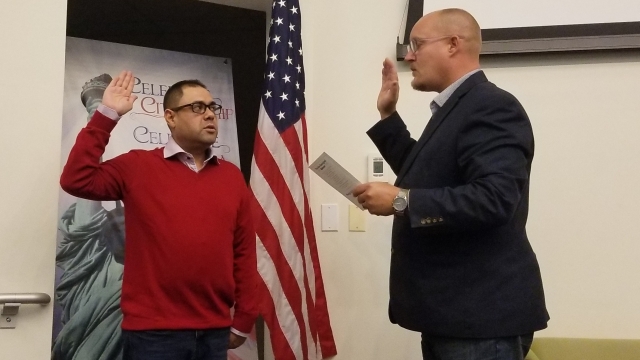 SMS
Formerly Deported Vet Attends State Of The Union For 'Voiceless Ones'
By Ben Schamisso
By Ben Schamisso
February 4, 2020
U.S. Rep. "Chuy" García invites Miguel Perez, who was once deported but is now a citizen, to spotlight fellow vets who are still banished.
SHOW TRANSCRIPT

"I'm not upset. I don't have grudges against anyone. But I'm proud to have served. And everything that happened afterwards just goes to show the many flaws that we have in our system."

Army veteran Miguel Perez served two tours in Afghanistan while he was a legal permanent resident. Then he was deported to Mexico for a nonviolent drug conviction. Last year, Illinois Gov. J.B. Pritzker pardoned him, clearing the way for the deportee to reunite with his family in Chicago. Congressman Jesús "Chuy" García invited Perez, now a citizen, as his guest for President Trump's State of the Union address.

"We wanted to shine a spotlight on him and fellow veterans who have been deported to their country of origin who are seeking to come back here to be reunited with their families."

Perez received a general discharge in 2004. Diagnosed with PTSD, he struggled with depression, anxiety and substance abuse. In 2008, he was caught with a friend delivering cocaine to an undercover agent.

"I made mistakes, you know. I started self-medicating, dealing with my own problems, thinking that that was the way out. And that's what led to my incarceration."

Perez pleaded guilty to the drug charge and spent more than seven years behind bars. But instead of going home after serving his sentence, he was transferred to ICE and deported to Mexico in 2018. He had been living in the U.S. with a green card since he was 11. When noncitizens commit crimes, ICE typically lets them serve their prison time in the U.S. and then deports them.

Before deporting veterans, ICE is supposed to consider their service performance and duration, along with their family ties to the U.S. But a 2019 Government Accountability Office report found that the agency "does not consistently adhere to those policies, and does not consistently identify and track such veterans." As a result, the government doesn't know the number of veterans it removes. The GAO report found at least 92 cases of deported veterans from 2013 to 2018. But veteran advocates say the numbers are far higher.

"You have deported veterans all over the world, not just in Mexico. I cannot just forget and continue my life. I've been given this platform where I can speak and advocate for those voiceless ones."

ICE tells Newsy that it's simply enforcing a law mandating the removal of individuals "who have been convicted of aggravated felonies." The agency adds that "in 100 percent of the veteran case files GAO reviewed, the individuals were placed into removal proceedings because of felony convictions related to drugs; sexual abuse, of which 18 involved minors; firearms, explosives, or explosive material; kidnapping; terrorist threats; and other crimes."

Several bills aiming to address the plight of deported veterans have recently been introduced on Capitol Hill. But with legislation stalled in Congress, Perez and his supporters are calling on local governments to create restorative justice programs for veterans who get in trouble with the law. For example, they applaud the quick expansion of veterans courts, where rehabilitation programs are offered as an alternative to incarceration.

"We have veterans who come out of the military struggle in different ways. Some of them commit nonviolent crimes and don't have access to the resources that help them cope in a more productive way."

Many deported veterans — including Perez — would have avoided deportation had they naturalized during their military service. The U.S. has long rewarded immigrant service members with a fast track to citizenship. But Perez says he missed out on the benefit because of misinformation and red tape.

After 18 months as a deportee in Mexico, Perez was allowed to move back to the U.S. thanks to Gov. Pritzker's pardon. He reunited with his two children and parents, who are also U.S. citizens. Then, he became the second veteran ever to gain citizenship after being deported following a criminal conviction.

"I was thrilled. It felt like a dream. And when I was sworn in, it just felt natural, you know, because I have always been an American. It was just that birth certificate, just being born somewhere else that said, 'No, you're not an American,' but I lived here my whole life. I fought for this country. I fought for this community, you know. So it felt right that finally, you know, this was done and over with."