Pressure On Biden To Speed Up Entry Process For Refugees 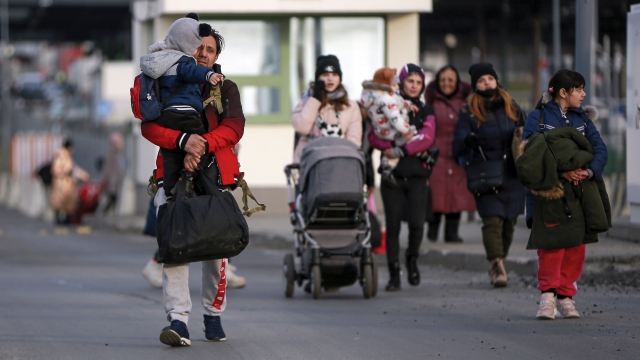 Kyiv native, Igor Voloshen is an immigration attorney outside Philadelphia.

"We receive phone calls every day of people who are extremely concerned for their loved ones still residing in Ukraine," said Voloshen.

Earlier this month, the Department of Homeland security announced an 18-month temporary protected status program for Ukrainians, it's something Voloshen says he receives lots of questions about. Unfortunately, right now, there's not much attorneys can do.

"Any Ukrainian who was physically present in the United States as of March 1 is eligible to apply for that program after that program is published in the federal registrar. It still hasn't happened," explained Voloshen.

Eric Cudar says his future sister-in-law and her two children were able to escape Ukraine. Now, he's trying to get them to the United States.

"I would think they would make it easier to get some of these folks over here particularly people like my future sister-in-law who doesn't need government help. If we get her here, we can take care of her and help the kids with the trauma they've been through," said Cudar.

Cudar says he's been given conflicting information. Like, learning the U.S. is turning down visitor visas because Ukrainians may not have a country to return to.

"It's confusing as can be it's very frustrating," Cudar says.

Cudar, like many others, is urging U.S. leaders to make it easier for refugees to get emergency visas to come to the U.S., even if it's just temporarily.

"The American people will be steadfast in our support of the people of Ukraine," said President Joe Biden.

President Biden has said the U.S. will welcome Ukrainian refugees "with open arms," but critics argue swifter action needs to be taken.

On our southern border, some Ukrainian refugees are being let in on a case-by-case basis despite pandemic restrictions at the border

And while the U.S. has provided more than $186 million in additional humanitarian assistance to Ukrainians, Secretary of State, Antony Blinken says the priority now is to help European countries that are inundated with refugees.

"Ukraine's neighbors in Europe are generously welcoming and supporting refugees. The United States will do our part to help those governments and the humanitarian organizations on the ground to meet this tremendous need," said Blinken.

Voloshen says it will take more than just money and sanctions.

"We heard in the very early days of this conflict that this Administration was going to make accommodations for them [Ukrainian refugees] happen. So far, it's only been rhetoric," said Voloshen.

Something that could help a lot of refugees, the Biden administration says it is weighing a range of options to expedite the refugee process for Ukrainians with family in the United States. So far, there is no timeline for when that could happen.