Pressure Mounts On EU To Cut Its Dependence On Russian Energy 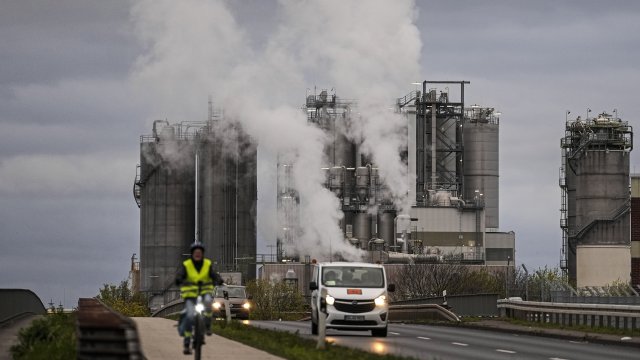 SMS
Pressure Mounts On EU To Cut Its Dependence On Russian Energy
By Ben Schamisso
By Ben Schamisso
April 28, 2022
The European Union is scrambling to phase out its use of Russian energy. In the meantime, it continues to make hefty payments to the Kremlin.

Pretending to be dead in front of the German parliament — protesters say Germany and the EU have blood on their hands.

"Every single day one billion of European money is going to Russia to kill Ukrainians," said Olha Sytnyk, protest organizer.

The European Union has acted with unprecedented speed and unity in sanctioning Russia, but energy is the 27-country bloc's weak spot.

Before the war in Ukraine, Russia provided the EU with a huge percentage of its energy imports: 47% of its coal, 41% of its gas and 27% of its oil.

That means transportation, heat and electricity, not just for households, but also for big industries.

Large economies like Germany, Italy and the Netherlands are especially dependent.

Russia’s invasion of Ukraine has forced a momentous reckoning.

The EU is now phasing out Russian coal by this summer and aims to slash Russian gas by two thirds by the end of this year.  It set 2027 as a final deadline to entirely break off its dependence on Russian gas and oil.

But for Ukraine, that’s way too late.

According to the Centre for Research on Energy and Clean Air, the EU has paid more than 46 billion euros to Russia for its energy since the beginning of the war.

Europe is already under threat from Russia.

On Wednesday, the Kremlin stopped gas exports to Poland and Bulgaria.

“We should now go for the oil sanctions in order to regain initiative and essentially letting Putin play to our game and not play to Putin's game," Zachmann said.

Germany and others fear going too far could hurt consumers and factories at home.

“At what point do the European publics rebel against high energy prices?" asked Randolph Bell, director of the Atlantic Council's Global Energy Center. "How many of them  can be brought along for this energy austerity ride?”

Energy analysts says the perfect compromise, for now, is to impose tariffs.

“Tell them if you want to export oil to the EU: 20, 50 or whatever percentage point off of the value of the oil goes into a European taxpayer's pockets," Zachmann said.

As for Russian gas, a ban is not yet on the table because Europe — particularly Germany — is a lot more dependent on it.

Gas imports are also harder to replace because they run to Europe via pipelines coming from Russia.

“Then then they have to really start thinking about demand management, curtailing the use of gas, etc. and there's a real economic risk to European economies and therefore, to global economies, frankly," Bell said.

Still, there are alternatives.

Internally, Europe can also increase its nuclear energy production to get by in the short-term.

But in the longer term, using less energy altogether and continuing to invest in renewables will be key.

“We should think about speeding up the deployment of renewables big time, because that will reduce the cost, the dependence and save the climate," Zachmann said.