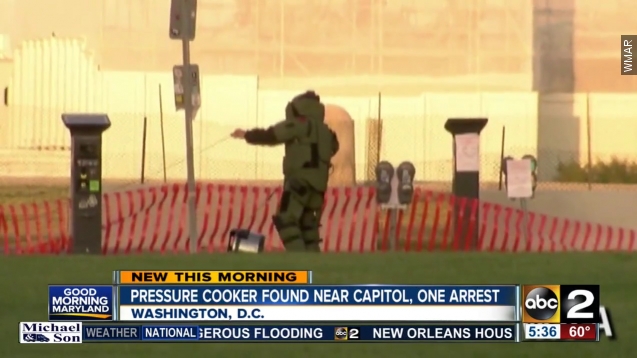 You're looking at a bomb squad technician readying a pressure cooker to be destroyed Sunday on the National Mall in Washington, DC. (Video via WMAR)

And that's the sound of Capitol Police doing what they, in a statement, rather formally called "disrupt[ing] items of concern." (Video via WNBC)

"I just heard a big boom. It sounded like a cannon going off," one witness told WJLA.

Capitol Police had warned the public about the noise of the controlled detonation ahead of time and also say no one was never in any danger.

But thousands were in the area for the National Memorial Day Concert. (Video via National Park Service)

And while this one apparently wasn't a threat, pressure cookers have been used in fatal incidents like the Boston Marathon bombings.

Police did find the car's owner, Israel Shimeles, and arrested him Sunday.