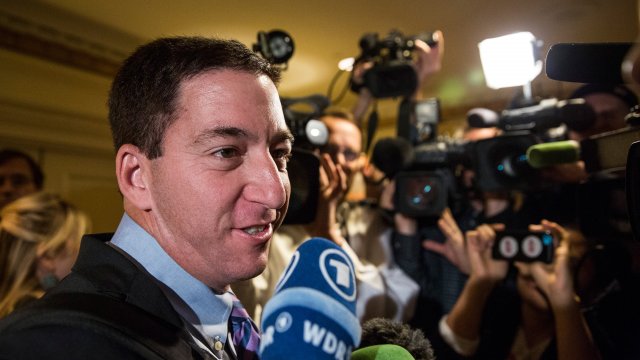 Protesters gathered outside the Brazilian Embassy in Washington, D.C. to rebuke the government of President Jair Bolsonaro.

The charges come less than a year after Greenwald published a series of articles based on leaked messages.

Politicians, free press advocates and journalists have decried the charges as politically motivated and part of a larger effort to curb free speech.

He's that tough and that self-directed. That’s something to admire and we do admire it. Glenn Greenwald, we are rooting for you tonight.

We're going to defend a free press like we always have. We’re not going to be intimidated by the Bolsonaro government.

In a 95-page criminal complaint, prosecutors accused Greenwald of directly helping hackers obtain classified information, rather than just reporting on it.

A member of Brazil’s supreme court determined last year that Bolsonaro's administration should drop its investigation into Greenwald because it violated his press freedom rights.

But in January, Brazil's federal prosecutor's office said that it found audio recordings, which, they argued, implicated Greenwald.

Bolsonaro's administration has previously come under scrutiny for allegedly stifling press freedom. The latest charges against Greenwald are likely to amplify those concerns.