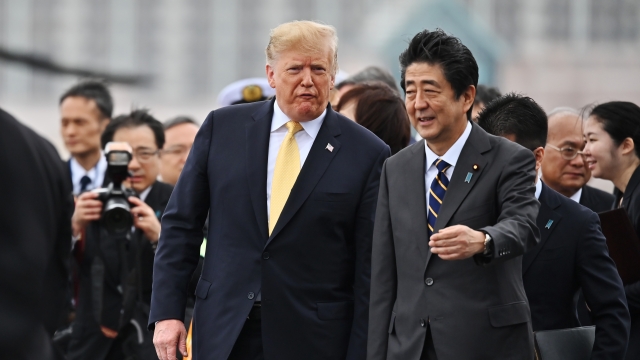 But before leaving the country, the couple greeted U.S. service members stationed aboard the USS Wasp at Yokosuka Naval Base and wished them a "happy Memorial Day."

"On this Memorial Day evening in the United States, Americans are concluding a sacred day of remembrance, reflection and prayer. ... The citizens of our country are incredible. They love our country, and they love you," President Trump told those on board.

While there, President Trump commended Abe for Japan's pledge to purchase more than 100 U.S.-made jet fighters. That decision, which was announced back in late 2018,  makes the country the largest non-U.S. customer of the F-35 Lockheed Martin jet.

"With this extraordinary new equipment the Kaga will help our nations defend against a range of complex threats in the region and far beyond," President Trump told U.S. and Japanese forces in the hanger of the J.S. Kaga.