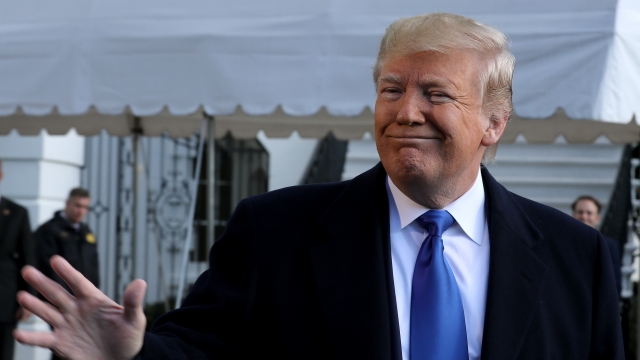 In an interview with "Fox & Friends" on Friday, President Donald Trump wouldn't say whether he will sign a bill that supports anti-government demonstrators in Hong Kong.

President Trump also said "thousands of people would've been killed in Hong Kong right now" if he hadn't told President Xi Jinping that intervening in the protests would "affect [the] trade deal."

Just the day before that interview, China urged the U.S. to "immediately take measures to prevent [the Hong Kong Human Rights and Democracy Act] from becoming law." The measure, which overwhelmingly passed in both chambers of Congress this week, would require Washington to annually assess Hong Kong's status as a U.S. trading partner, as well as impose sanctions and other penalties against those who are undermining the city's autonomy.

Anti-government protests in Hong Kong, which have been going on for months, initially began over a controversial bill that would've allowed the extradition of people in Hong Kong to mainland China. Hong Kong's Legislative Council formally withdrew the bill last month, but the protests are ongoing.

Meanwhile, the trade war between the U.S. and China has been going on for nearly two years and led to tariffs on hundreds of billions of dollars in goods. Although both countries came to an "agreement in principle" in October, negotiations have seemingly stalled since. President Trump said in Friday's interview that the U.S. was "very close" to having a potential deal.

The president has until the end of November to decide on whether to sign the Hong Kong bill into law or veto it. Given the bill's widespread support in Congress, if President Trump does veto it, there's a good chance lawmakers will be able to overrule that decision.