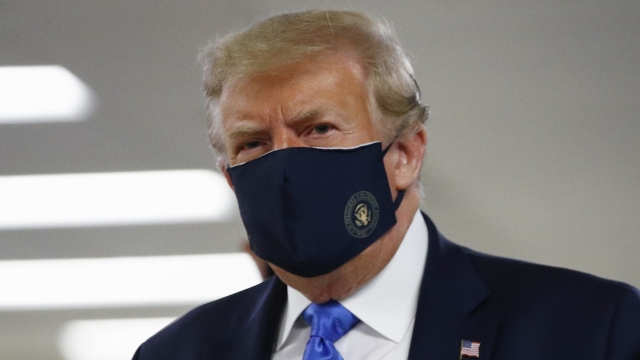 President Donald Trump wore a mask publicly for the first time during the pandemic on Saturday.

He wore the mask during a visit to Walter Reed Military Hospital in suburban Washington D.C. to meet with wounded soldiers and medical staff.

Ahead of the visit, the president told reporters at the White House:  “I think when you're in a hospital, especially in that particular setting where you're talking to a lot of soldiers and people that in some cases just got off the operating tables. I think it's a great thing to wear a mask. I've never been against masks, but I do believe they have a time and a place."

Presumptive Democratic Nominee Joe Biden's campaign reacted with criticism that the president has "politicized" face masks and didn't wear one sooner. A Biden campaign spokesperson said, “Donald Trump spent months ignoring the advice of medical experts and politicizing wearing a mask, one of the most important things we can do to prevent the spread of the virus."

President Trump has been resistant to masks, accusing reporters of only wearing them to be "politically correct." But many prominent Republicans, including Vice President Mike Pence, have encouraged mask wearing as COVID-19 cases rise across the nation.

Pence told reporters in late June, "Wear a mask whenever your state and local authorities say it's appropriate. It's always it's always a good idea to wear a mask when social distancing is not possible."