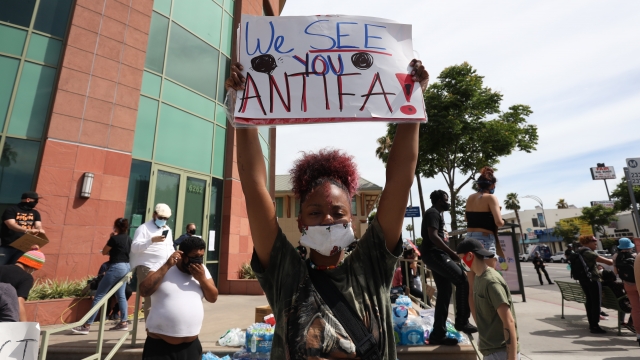 "We're not actually a terrorist group or whatever," says Lacy MacAuley.

Newsy spoke with MacAuley, a long-time and unusually open anti-facist activist, after the president declared his desire to designate antifa a terrorist organization — a label that, by law, cannot be applied to a domestic group.

"Right now some of my friends and family are, like, a little worried for me, of course. You know, no level of silence is going to benefit me right now," says MacAuley.

MacAuley says the secrecy of most black-clad members isn’t just about avoiding police detection. They could lose their jobs for their activism, especially now, as the Trump administration and far-right media outlets seek to portray antifa as an organized and violent group.

"They were getting this tradecraft from someone else, someone with much more experience, someone who did this for a living," said a concealed person in a far right Project Veritas video.

Antifa, which traces back to Europe in the days after Hitler and Mussolini, has no membership card or central organization.

"Antifa don't subscribe to the sort of predominant liberal values about respecting the opinions of your political opponents — they believe that given the history of the Holocaust and slavery and so forth, that White supremacists and fascist ideas aren't deserving of their respect. And in that way, they seek to do whatever is necessary to prevent these ideas from gaining a greater foothold in society," says Mark Bray, author of Antifa: The Anti-Fascist Handbook.

That philosophy has led some to damage property and get into physical confrontations. Antifa has also earned the full attention of the FBI.

"We the FBI have quite a number of ongoing investigations of violent anarchist extremists, including those motivated by an antifa or antifa-like ideology. And we categorize and treat those as domestic terrorism investigations," said FBI Director Chris Wray.

Of 51 arrests made for federal crimes arising out of the protests, the FBI and Justice Department declined to tell Newsy just how many were linked to antifa. Journalists have found no links.

"It has the threat of expanding that kind of criminalization or demonization to the entire radical left, since it's so unclear who is or is not antifa. That in a kind of worst-case scenario, anyone who has a politics to the left of Joe Biden could be viewed as a terrorist," says Bray.

Antifa members haven’t killed anyone. And linking them to terrorism, as the president and social media posts have, is already impacting the country. In Washington state, a sheriff’s office says one multi-racial family was asked if they were antifa members and followed with vehicles and what appeared to be semiautomatic rifles. In Colorado:

"Good evening, thanks for joining us. Police say a guy in Loveland held two people at gunpoint that he thought were members of antifa," a local news outlet reported. "Turns out they were roofing company employees working in his neighborhood."

For MacAuley, who says she’s been harassed online and subjected to death threats, the work continues: