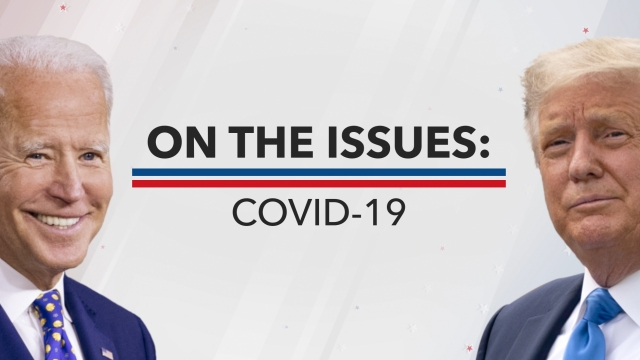 The coronavirus pandemic has upended Americans' lives. So how have the leading presidential candidates approached it so far and how will they handle the crisis after the election?

Let’s start with face masks: Public health officials continue to stress they’re crucial to stopping the spread of the virus.

“Face masks are the most important, powerful public health tool we have,” said Robert Redfield, Director, Centers for Disease Control and Prevention.

President Trump has worn them in public and has encouraged others to wear them too.

But he frequently doesn’t and often mocks former VP Joe Biden for doing so.

“It gives him a feeling of security. If I were a psychiatrist, right now, I'd say I'd say this guy's got some big issues,” claimed Trump.

Biden, who is rarely photographed without a mask, called for a three-month national mask mandate but walked it back, saying it could be unconstitutional and that instead he would lead by example and mandate masks on federal property.

The Trump administration has encouraged states to take the lead on masks.

Then there’s the US relationship with the World Health Organization. In July, the Trump administration announced a formal withdrawal from the WHO effective July 2021.

The president accused the organization of working alongside China to cover up the severity of the virus.

“The World is now suffering due to the malfeasance of the Chinese government," said Trump.

Biden says, if elected, the US will rejoin the organization on day one.

One area of agreement, both candidates are aiming to make a COVID-19 vaccine free or at no out of pocket costs to all Americans. Amber Strong, Newsy.