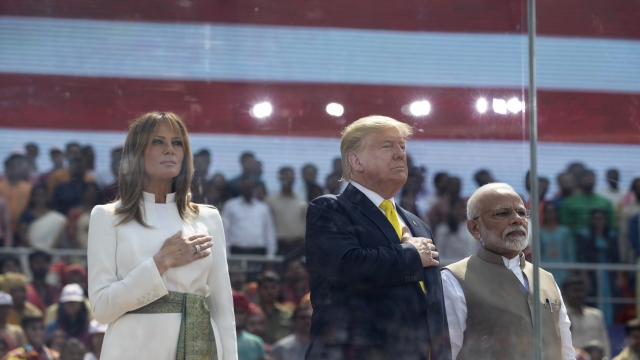 "America will always be faithful and loyal friends to the Indian people," President Trump said.

President Trump sang praises in India, prompting a celebratory roar from the more than 100,000 people gathered to see him at a rally dubbed "Namaste Trump."

This is President Trump's first official visit to India. On the 36-hour itinerary: tours of the Taj Mahal, the former home of Mohandas Gandhi, and the world's largest cricket stadium in the hometown of Indian Prime Minister Narendra Modi.

But his visit isn't all sightseeing.

"Over the course of my visit, Prime Minister Modi and I will also discuss our efforts to expand the economic ties between our two countries," President Trump said.

President Trump announced India would buy $3 billion worth of military equipment. It's one of many trade deals he said he's optimistic in securing. It's also a shift from rising trade tensions that escalated last year, when the U.S. ended India's special trade status and India retaliated with tariffs on 28 U.S. products.

Outside the rally, Indian citizens protested against the pageantry, including members of the Centre of Indian Trade Unions, leading to arrests. Their issue? Prime Minister Modi's attempt to bolster his image ahead of an election — an effort that has cost the Indian government more than $14 million. Part of that money went toward building a wall to hide a slum near the stadium President Trump visited.

And there's no hiding Prime Minister Modi's controversial citizenship law. At least 23 people have died across India in ongoing protests against the Citizenship Amendment Act, as it excludes Muslims. So far, President Trump has not acknowledged the controversy. He's set to depart India late Tuesday night.