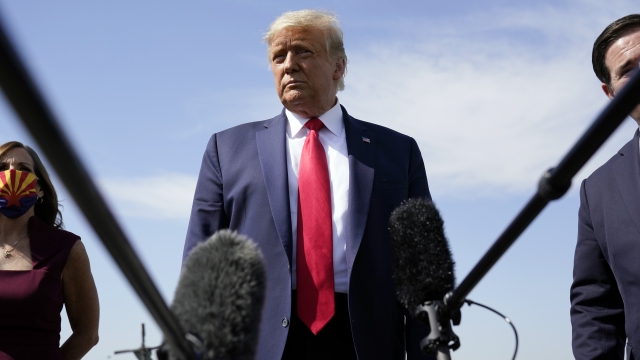 President Donald Trump won Yavapai County, Arizona by 30 points back in 2016 and he's hoping he can get those same voters to vote for him a second time.

Supporters of the president turned out in droves Monday, creating a parade of flags and red caps on the outskirts of town.

The president's visit came amid protracted stimulus negotiations nearly 2,000 miles away in Washington.

"I'm back working, so for me personally, it's not impacting me," said Joe Gleason of Surprise, Arizona. "But it frustrates me for other Americans that might need it.

Many people Newsy talked to in the Prescott, Arizona area said they didn't need the extra cash. Some donated it to charity and others deposited it into their savings. Others, like Drew Tossing, a homeless veteran, said more money could get him off the streets.

"It sucks," Tossing said. "If our own government, which is supposed to help the people, can't get their act together, then what the hell are we paying them for?"

In Washington, gridlock only underscores the partisanship here in this city, popular with retirees and conservatives, where many were spotted maskless on Monday.

"When all the Democrats in the House of Representatives vote in unison for for issues that should be controversial," said Larry Kuhn of Prescott, Arizona. "Some of them should vote contrary to the wishes of Nancy Pelosi, but they don't and it's because of the power she holds over our other elected officials. I think that's shameful."

Prescott may be a Republican stronghold. But that doesn't mean everyone is happy about the president's visit, rallying a tightly packed crowd at the regional airport amid a statewide spike in COVID cases.

"It's a terrible price to pay," said Joe Petty of Prescott, Arizona. "It just shows what an egotist he is, that he'd rather stroke his own ego and infect a bunch of other people than do the right thing."

Now, if current polling trends hold, the state could elect its second Democratic senator in just over two years and potentially a President Joe Biden.