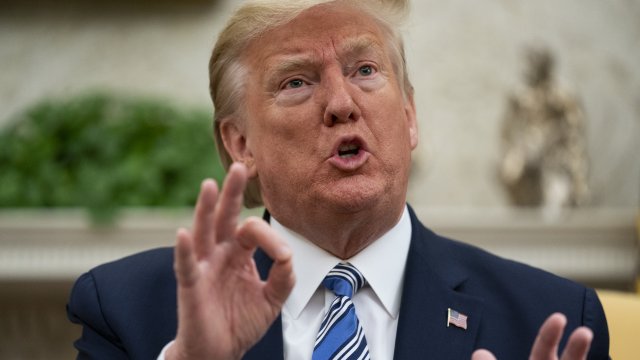 Two of the nation’s biggest pork processing plants are currently closed due to coronavirus outbreaks. America’s 15 largest pork-packing plants account for 60 percent of all pork processed in the U.S.

A senior White House official who spoke on condition of anonymity said the administration’s action is designed to prevent multiple long-term plant shutdowns that could lead to a supply drop of 80 percent in supermarkets.

During an Oval Office meeting with Florida Gov. Ron DeSantis, the president told reporters, “there’s plenty of supply,” and said the executive order would help avoid a “legal roadblock.”

Tyson Foods, which has suspended operations at its largest pork plant, took out full-page ads Sunday in American newspapers describing its difficulty keeping operations running while also ensuring the safety of 100,000 workers.

According to the United Food and Commercial Workers International Union, 13 workers in the food-processing and meatpacking industry have died from COVID-19, with an estimated 5,000 exposed to co-workers who’ve tested positive.

Over the weekend, the U.S. Labor Department and Centers for Disease Control issued new guidance for meatpacking workers. It said they should be spaced at least six feet apart, must wear face coverings and require daily screenings before starting their shifts.

Contains footage from CNN. Additional reporting by Jill Colvin of the Associated Press.