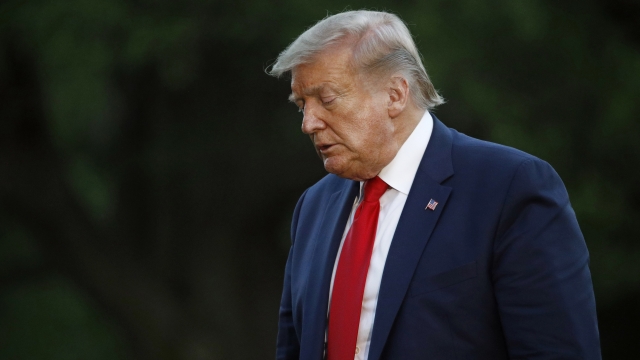 President Donald Trump called on governors to take more aggressive action on people causing trouble at protests during a teleconference call on Monday.

"What happened in the state of Minnesota — they were a laughing stock all over the world," President Trump said. "And I said you gotta use the National Guard in big numbers ... They didn't at first and then they did and I'll say — I don't know what it was — it was the third night, fourth night — those guys walked through that stuff like it was butter ... But what's going on in New York is terrible, it's terrible — of all the places. What went on last night in Los Angeles with the stores and the storefronts is terrible. No domination. You have to dominate."

President Trump also called some governors "weak" in their response to troublemakers at demonstrations over the death of George Floyd, and warned them that they'll "look like a bunch of jerks" if they didn't take his advice.

During the call, Illinois Gov. J.B. Pritzker criticized the president's "inflammatory" rhetoric, saying more calls for calm by national leadership, as well as "making sure that ... the concerns of ... legitimate peaceful protesters" are addressed, is what "will help us to bring order."

Michigan Gov. Gretchen Whitmer also took issue with President Trump's remarks, saying in a statement: "The president's dangerous comments should be gravely concerning to all Americans, because they send a clear signal that this administration is determined to sow the seeds of hatred and division, which I fear will only lead to more violence and destruction. We must reject this way of thinking. This is a moment that calls for empathy, humanity, and unity."