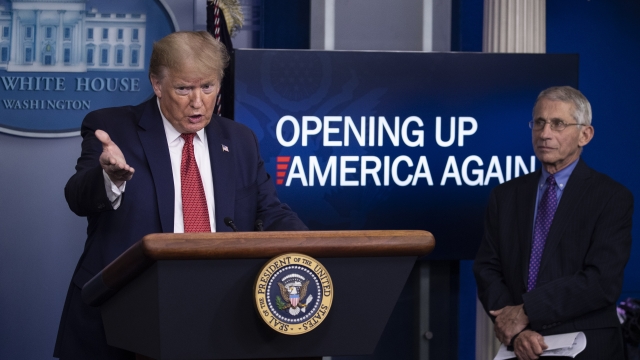 SMS
President Trump To Supporters: 'Liberate' The U.S.
By Adam Elrashidi
By Adam Elrashidi
April 17, 2020
Several states, including some the president called to "liberate", have recently seen protests over stay-at-home orders.
SHOW TRANSCRIPT

President Donald Trump is calling on his supporters to "liberate" the United States, specifically Minnesota, Michigan and Virginia. On Friday, the president unleashed a series of tweets criticizing the WHO, Democrats and New York Governor Andrew Cuomo over their respective responses to COVID-19.

The president's comments come amid widespread protests demanding a rollback of stay-at-home guidelines. But it's worth noting that those three states are vital to the president's reelection plan, and all three states have Democratic governors.

Most of the protesters in these states ignored social distancing, as well as chose not to wear masks while out in public.

On Thursday, the White House issued new guidelines for states to start lifting coronavirus restrictions, which have hammered the nation's economy. But critics say President Trump is using his bully pulpit to encourage people to effectively undermine state authorities as they work to contain the spread of the virus.

Gov. Cuomo responded to the president's tweets during his daily press conference.

New York Gov. Andrew Cuomo: "All he's doing is walking in front of the parade but he has nothing to do with the timing of the parade, right? ... How many times do you want me to say thank you? But I'm saying thank you for doing your job."

Cuomo added that states still need federal funding and governors will reopen their states "when they think they should open."