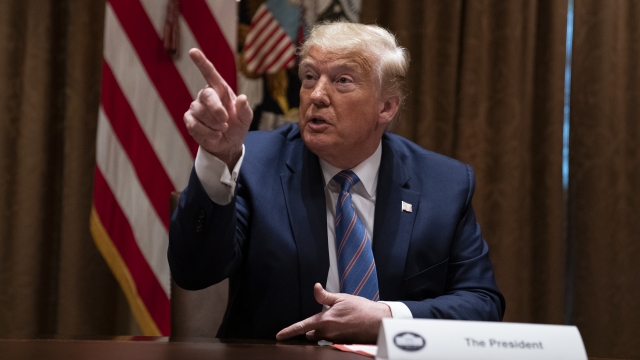 SMS
President Trump To Sign Executive Order On Police Reform
By Katherine Biek
By Katherine Biek
June 16, 2020
The White House developed the order after talking to police officers, as well as families who have had loved ones killed by police.
SHOW TRANSCRIPT

President Trump: "This is about law and order, but it’s about — it’s about justice also. And it’s about safety."

News about the impending executive order comes weeks after George Floyd died in police custody in late May. His death has sparked mass protests around the world against racial inequality and police brutality.

"Basically we’re going to be talking about things that we’ve been watching and seeing for the last month. And we’re going to have some solutions — I think some good solutions. And some of it, as you know, it’s about great people. We need great people in our police departments, and we have mostly great people. ... But we — we will do better. Even better."

Senior White House officials say the president's order will create a database to track police officers nationwide who use excessive force on the job. Such a database could help police departments avoiding hiring officers who've been accused of misconduct.

The officials said the order will also encourage police departments to improve by providing federal grant money to those that employ best practices.

Finally, the order is expected to direct the Department of Health and Human Services to push police departments to include mental health professionals in their response to calls when appropriate. Those types of calls could include ones relating to homelessness, addiction and mental health.

The White House developed the order after talking to police officers, as well as families who have had loved ones killed by police.