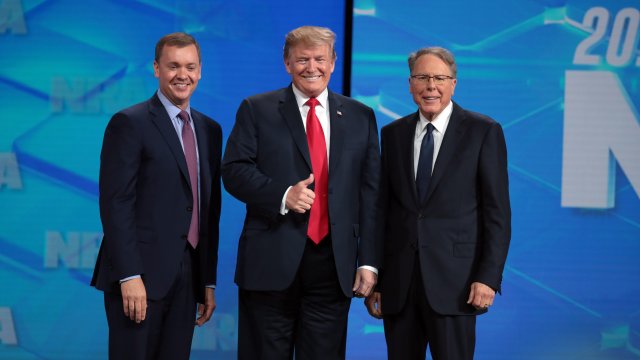 President Trump is pulling the United States out of another treaty supported by the Obama Administration.

The President told a friendly audience at the National Rifle Association's annual convention the United States will be withdrawing itself from the International Arms Trade Treaty.

He says he'll notify the United Nations America is pulling out of the treaty then-President Barack Obama signed in 2013.It was never ratified by Congress.  The treaty, supported by nearly 200 countries, aims to keep arms from being sold to human rights abusers. The United States is the largest dealer of these weapons.

"We will never surrender American sovereignty to anyone. We will never allow foreign bureaucrats to trample on your second amendment freedom," he explained.

The president, who spoke for about an hour, also called for the further arming of law enforcement and teachers.

The American Federation of Teachers, The National Association of School Resource Officers and the National Education Association oppose guns in schools. His remarks, in direct contrast with Congressional democrats, who have been working on various pieces of legislation combating gun issues since taking over the House in January.

"Democrats want to disarm law abiding Americans while operating with impunity. But that will never happen as long as I'm your president, not even close," he told supporters.

As the 2020 race gets underway, President Trump is using this issue to pit himself squarely against the nearly two dozen democrats running to remove him from the White House.

"They especially want to take away your guns," he told attendees, "You better get out there and vote. It seems like its a long ways away. It's not."