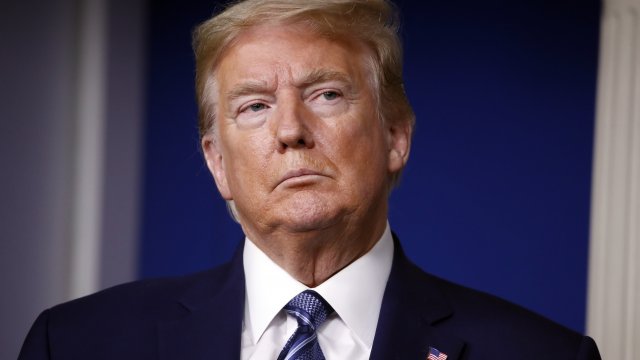 President Trump is defending his immigration "suspension", saying the pause will help Americans get back to work.

"It would be wrong and unjust for laid-off Americans to be replaced with new immigrant labor flown in," President Trump said on Tuesday evening.

The president doubled down on his Monday evening tweet about temporarily suspending immigration to the U.S. to protect American workers from foreign competition once the economy reopens.

He has yet to sign an executive order and details remain unclear. But he said Tuesday evening the U.S. will stop issuing green cards for 60 days. He also admitted his immigration pause "will not apply to those entering on a temporary basis,” such as technology workers, farm laborers and others.

It's unclear what legal authorities the president will use to justify the order.

Immigrant advocates decried the president's tweet as a distraction to divert blame for the coronavirus crisis onto immigrants even though they make up a large share of the doctors and nurses on the front lines of the fight against COVID-19.

"In the hospitals I work in Chicago, five hospitals, 90% of the doctors in critical care are immigrants. And these are the ones who are in the forefront of treating patients with COVID," said Dr. Zaher Sahloul, a critical care physician.

"I have had so many clients reaching out to me," said Sandra Feist, an immigration attorney. "People who have already had their green cards issued. People who have visas abroad who are waiting to come in because of the coronavirus. It's been a really painful experience dealing with this executive order by tweet, which is clearly just an effort to distract from the coronavirus by fearmongering," she added.

Immigration opponents cheered the news. They say reducing legal immigration could open up jobs for the millions of suddenly unemployed Americans. But they want the president to also pause guest workers programs.

"There is simply no justification whatever for admitting foreign workers into the kind of economy we have today, which is experiencing the highest levels of unemployment since the Great Depression," said Mark Krikorian, executive director of the conservative Center for Immigration Studies.

Last month, the White House used a special health care emergency authority to close the border to undocumented migrants and asylum-seekers. But the new plan could temporarily shut down the country to most foreigners abroad looking to legally immigrate to the U.S.