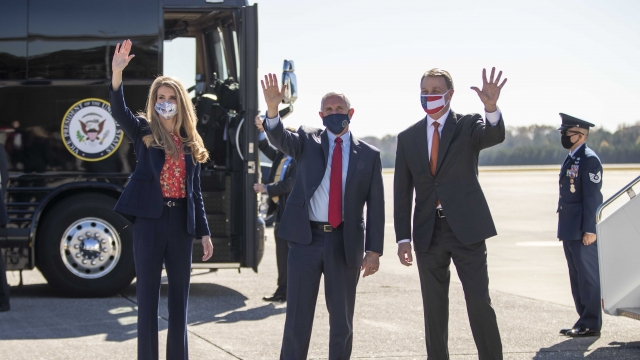 Millions in ad spending, joint campaign events across the state and appearances from top party leaders -- all leading up to extremely rare duel U.S. Senate runoff races in Georgia that will determine the balance of power in Washington.

But one major factor outside of the state could have a significant impact on the race.

"I just want to tell my people, don't be disappointed yet because this race is far from over," said President Trump.

President Donald Trump and his allies have continued to question the integrity of the election in key states including Georgia -- claims that have been debunked by state officials and experts. Now Republicans in the state worry rhetoric from President Trump and his allies could hurt the chances of incumbent Sens. Kelly Loeffler and David Perdue in the Jan. 5 election.

"Why would you go vote in another rigged election? For God's sake, fix it," said attorney and President Trump ally Lin Wood.

"If you're casting doubt on the election and you have surrogates who are out there telling people that they shouldn't vote in the runoff election because the entire system is corrupt in a close election, that could be possibly ceding ground," said Emory University political science professor Andra Gillespie.

President Trump is set to campaign in the state this weekend as he continues to call out Republican Gov. Brian Kemp on Twitter. Some Republicans worry the president's first post-election rally could do more harm than good.

"I think In order for the 2021 runoffs to be as successful as humanly possible on some basic level, you have to actually put the 2020 election to bed," said Republican strategist Joseph Pinion. "And I think that trying to press the case for both simultaneously, you run the risk that you're going to breathe life into the Democratic cause down in Georgia."

Democrats are optimistic after a historic win in the Peach State for Joe Biden. They will also get some star power of their own, with former President Obama making a virtual stop for Democratic candidates Jon Ossoff and Raphael Warnock.

Though Republican Senate candidates held a slight edge in total vote share for the Nov. 3 election,Democrats are focusing heavily on registering new voters ahead of the Dec. 7 deadline.

"We're doing a ton of text banking, phone banking, no-contact  lit drops, [and] we [hang] door hangers on doors so that people know we were there and all of that. So we're trying to make sure that we get people reengaged," said LeWanna Heard-Tucker, who is the chair of the Fulton County Democratic Party.

President-elect Joe Biden will likely pay a visit to the state, shining a light on the significance of both of these races because Democrats need to flip both seats to gain a majority in the Senate with Vice President-elect Kamala Harris casting the tie breaking vote.