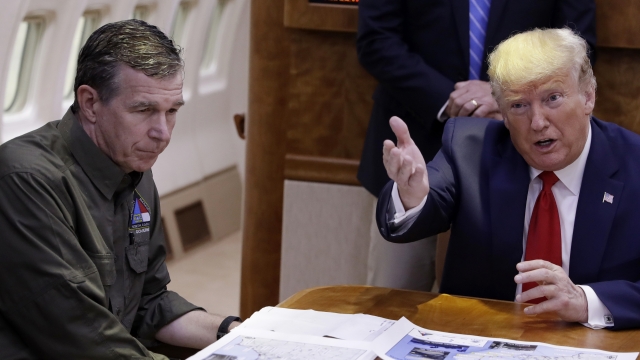 SMS
President Trump Threatens To Relocate Republican Convention
By Johannah Grenaway
By Johannah Grenaway
May 25, 2020
Gov. Roy Cooper recently said decisions on whether to allow large gatherings in North Carolina will be based on health experts and data, not politics.
SHOW TRANSCRIPT

President Donald Trump is threatening to relocate the Republican National Convention as North Carolina grapples with public safety issues amid the coronavirus pandemic.

The convention is scheduled for August 24-27 in Charlotte. The state just entered its second reopening phase on Friday, but the next day it had its largest daily increase in COVID-19 cases.

Last week, Gov. Roy Cooper told CNN that decisions on whether to allow large gatherings, such as the Republican National Convention, will be based on health experts' opinions and data, not politics.

President Trump addressed the governor on Twitter Monday saying: "Unfortunately, Democrat Governor, @RoyCooperNC is still in shutdown mood & unable to guarantee that by August we will be allowed full attendance in the arena."

He added that Republicans "must be immediately given an answer" otherwise he would be "reluctantly forced" to find another site for the convention and "all of the jobs and economic development it brings."

Cooper's office responded to the president's remarks, saying in a statement “state health officials are working with the RNC and will review its plans as they make decisions about how to hold the convention in Charlotte. North Carolina is relying on data and science to protect our state’s public health and safety.”

Meanwhile, the Democrats have pushed back their convention in Milwaukee from July to the week of August 17.

Additional reporting by Jonathan Drew of The Associated Press.