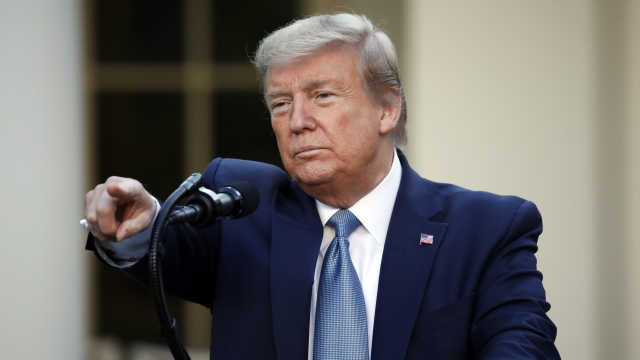 "The Senate should either fulfill its duty and vote on my nominees or it should formally adjourn so that I can make recess appointments."

President Donald Trump threatened to adjourn Congress Wednesday so he can fill administration positions without approval from the Senate. He said a lack of permanent appointees has made it difficult to govern, especially during the ongoing coronavirus pandemic.

"If the House will not agree to that adjournment, I will exercise my constitutional authority to adjourn both chambers of Congress."

The Constitution grants the president power do this if both chambers disagree on when to adjourn, but no president has ever used it. Most lawmakers are away from Capitol Hill right now because of the pandemic, but both the Senate and House plan to return on May 4.

The sticking point is that the Senate hasn't formally adjourned — instead, it's holding "pro forma" sessions, where lawmakers meet briefly every few days. Since it's not technically in recess, the president can't make any recess appointments.

"The current practice of leaving town while conducting phony pro-forma sessions is a dereliction of duty that the American people cannot afford during this crisis," President Trump said. "It is a scam, what they do."

He said this would probably be challenged in court.

"But when the court hears that we aren't getting people approved, as Sonny would say for two and a half years, for an important position that we need because of this crisis," President Trump said. "We needed these people before, but now we really need these people."