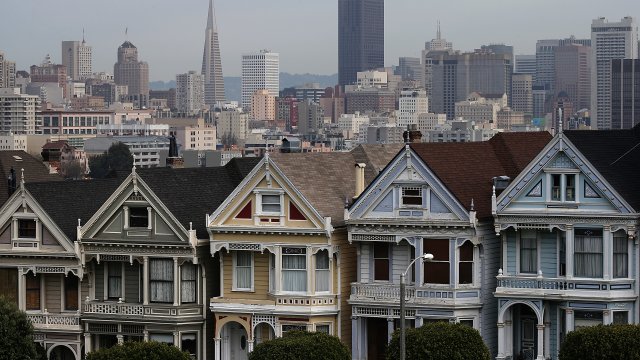 “They have to clean it up. We can’t have our cities going to hell," President Trump told reporters while discussing the San Francisco's homelessness.

President Trump says San Francisco’s ongoing struggle with homelessness is an EPA violation and that he is putting the city on notice.

President Trump, who had been in California for a two day campaign fundraising trip, told reporters aboard Air Force One Wednesday, "They're in total violation -- we’re going to be giving them the notice soon." He added, "They have to clean it up. We can't have our cities going to hell." The forms of pollution he cited included needles and waste heading into the ocean.

The comments were met with backlash from the city’s government. San Francisco’s mayor, London Breed said on Twitter, “If the President wants to talk about homelessness, we are committed to working on actual solutions, like adding 1,000 new shelter beds by next year and working to pass a $600 million affordable housing bond to create more badly needed housing.”

In January, a survey of San Francisco’s homeless population, showed that 8,011 people were experiencing homelessness in the city, under the federal Department of Housing and Urban Development Definition. A 17% increase over the 2017 Point-in-Time Count.

President Trump’s remarks came the same day he announced he would be revoking the state’s waiver that allows it to set its own vehicle emission standards. A move also contested by Mayor Breed and other California lawmakers, who have vowed to fight this decision in court.

Mayor Breed said on Twitter, “The President is cutting clean air and clean water standards, restricting our ability to regulate car emissions, and denying climate change even exists. He’s cut funding for homelessness and affordable housing. In SF, we’re meeting the challenges on our streets.”

This week, Governor of California, Gavin Newsom in a letter signed by various state and city officials called on the Trump administration to provide 50,000 more vouchers for rental subsidies, to increase the value of those vouchers to account for high rent and to create a program that incentivizes landlords to work with voucher holders to find stable housing.