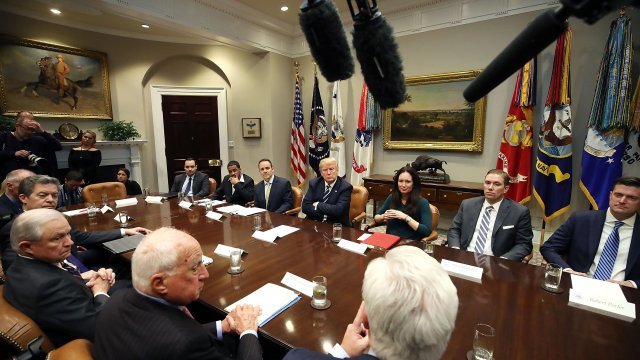 President Donald Trump is taking on an issue his predecessor championed: prison reform.

"We will be tough on crime, but we will provide a ladder of opportunity for the future," Trump said. "My administration is committed to helping former inmates become productive, law-abiding members of society."

Governors, conservative figures, faith leaders and Attorney General Jeff Sessions were at the listening session, and CNN reports they touched on "job training, mentoring and drug addiction treatment." Those elements aim to reduce recidivism rates, or the chance of being a repeat offender.

White House senior adviser Jared Kushner started the prison reform effort; he's been working on the initiative over the past couple months. Before Kushner, it was a bipartisan effort led by former President Barack Obama.

In Obama's second term in office, he became the first sitting president to visit a federal prison. He gave over 1,900 people clemency and helped fund programs to teach inmates employable skills. But Republicans like Sessions criticized how Obama used his pardoning power.