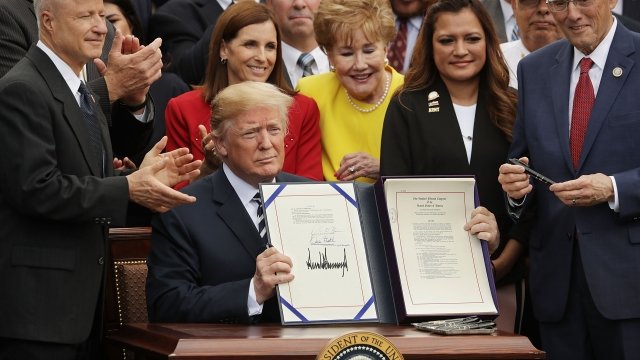 SMS
President Donald Trump Signs Bill Overhauling Parts Of The VA
By Ethan Weston
By Ethan Weston
June 6, 2018
The legislation aims to make it easier for veterans to choose to see doctors outside the VA.
SHOW TRANSCRIPT

The law, known as the VA MISSION Act, requires VA leadership to come up with new rules for when veterans can go see a private doctor. It also mandates $5.2 billion in funding for Veterans Choice — a program allowing some veterans to see doctors outside the VA.

The signing of the bill fulfills one of the president's major campaign promises to help expand veterans' access to the private health care market instead of having to go to the VA.

The new law also creates a commission for reviewing VA facilities and making improvements Congress hopes will make it easier to recruit health care professionals to the VA.