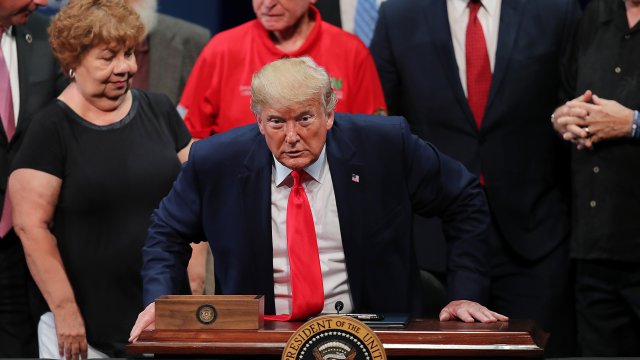 On Thursday, President Donald Trump moved forward with an executive order that he says will improve private Medicare plans for seniors. He also took the opportunity to criticize "Medicare for all" plans proposed by Democrats.

At a rally at a Florida retirement community, President Trump signed an order that directs the Department of Health and Human Services to develop proposals to improve certain aspects of Medicare, including the enrollment process, payment options and plan selections.

The executive order also aims to ensure that Medicare Advantage, a private-sector version of Medicare, would have equal footing with the original.

Before President Trump's speech at the rally, the White House released a fact sheet that called "Medicare for all" a "radical government healthcare takeover." It said the proposed program would "rob millions of seniors of their current benefits, restrict them from purchasing supplemental insurance, and put their lives at risk." President Trump attacked Democrats' health care proposals at the rally as well.

"Though they use many labels, all of the Democrat plans would devastate our health care system. The fake moderates on the left are telling the same lies they did under the last administration. But the last administration, frankly, was moderate compared from the maniacs that you're hearing from today. These are maniacs," said President Trump.

The executive order was reportedly originally called "Protecting Medicare From Socialist Destruction" on the White House schedule before it was renamed "Protecting and Improving Medicare for Our Nation's Seniors."