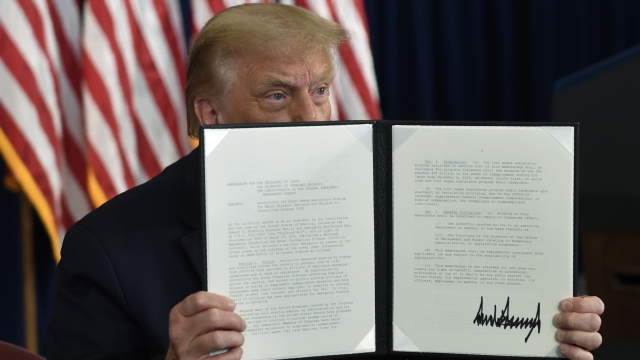 President Donald Trump signed an executive order and three memoranda Saturday in an attempt to bypass a stalemate in Congress over the next coronavirus relief bill.

"We've had it, and we're going to save American jobs and provide relief to American workers," he said.

The executive order directs the Treasury and Housing and Urban Development Departments to find any available funds to provide temporary financial assistance for struggling renters and homeowners so they can stay in their homes.

One memorandum extends a deferment of federal student loan payments.

Another provides Americans who file for unemployment with an additional $400 per week — a $200 decrease from the previous CARES Act. States are expected to cover a quarter of the cost, while the federal government will pick up the rest. The funds to pay for this relief are being diverted from FEMA.

The third memorandum defers payroll taxes for Americans who make less than $100,000 a year. Payroll taxes are taken out of paychecks to fund Social Security and Medicare. Workers would still be expected to pay the taxes back, though the president promised to forgive them on the condition of his reelection.

"We will end this pandemic and we will rebuild the greatest economy in the history of the world," the president said.

The actions are expected to face legal challenges, and they don't mean negotiations with Democrats are over. After the president's press conference Saturday, Democrats issued a statement calling for Republicans to return to the negotiating table.

Of the executive actions, they said “Today’s meager announcements by the President show President Trump still does not comprehend the seriousness or the urgency of the health and economic crises facing working families."