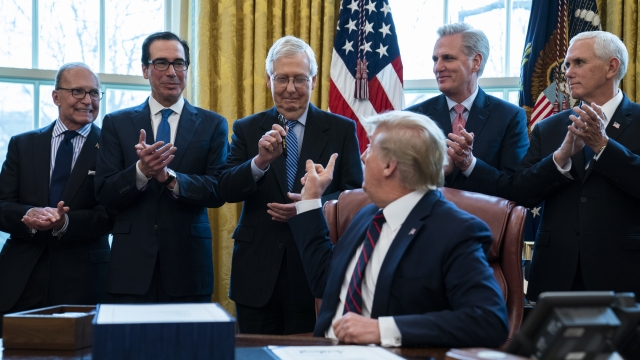 The nearly $500 billion bill made its way through the Senate earlier this week before being approved by the House in a largely bipartisan vote. So let's break down exactly where that money is going.

More than $320 billion will go towards the Paycheck Protection Program which was established by the CARES Act last month. This program provides loans to small businesses so they can keep employees on their payroll.

Another $60 billion will go to the Small Business Administration disaster relief fund. And the remaining $100 billion is going to hospitals and coronavirus testing. However, this bill doesn't include funding for states or local governments. Democrats say that is a top priority for future stimulus packages.

He said, "Let's weigh this very carefully because the future of our country in terms of the amount of debt that we're adding up is a matter of genuine concern."

Despite some partisan clashes in Congress, lawmakers have passed four coronavirus spending packages so far.

Rep. Alexandria Ocasio-Cortez was the only Democrat to vote against the most recent bill. She cited concerns for continued funding in the road ahead.

She said, "We have no date. We have no commitment on when this CARES 4 is going to happen. And so I have to vote based on what’s in front of us, based on the fact that this is the only bill that we are going to likely entertain in the two months of this crisis. And it is too small."