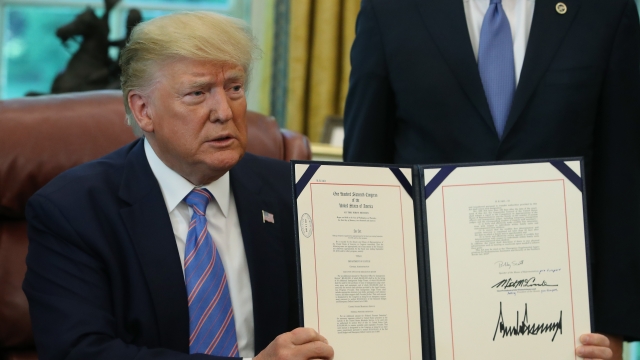 SMS
President Trump Signs $4.6B Border Aid Bill
By Katherine Biek
By Katherine Biek
July 2, 2019
Both chambers of Congress passed their own measures last week to address a White House request for money for operations at the border.
SHOW TRANSCRIPT

Both chambers of Congress voted on their own measures last week to address a White House request made back in May for money for operations at the border.

As Newsy previously reported, both bills included over $1 billion for shelter and food and almost $3 billion to provide care for migrant children.

But House lawmakers took things a step further and attached a series of restrictions to their bill, including provisions on the living conditions of migrant shelters, congressional oversight requirements, and protections for sponsors who take in unaccompanied migrant children.

The House ultimately passed the Senate version of the bill on Thursday. But Speaker Nancy Pelosi still managed to get Vice President Mike Pence to agree to a 90-day time limit for keeping migrant children in border intake facilities. He also agreed that the Trump administration would notify lawmakers within 24 hours if a child dies in federal custody.

The bill President Trump signed on Monday does not include any money for a border wall.