President Trump Says Russia Should Be Readmitted To G-7 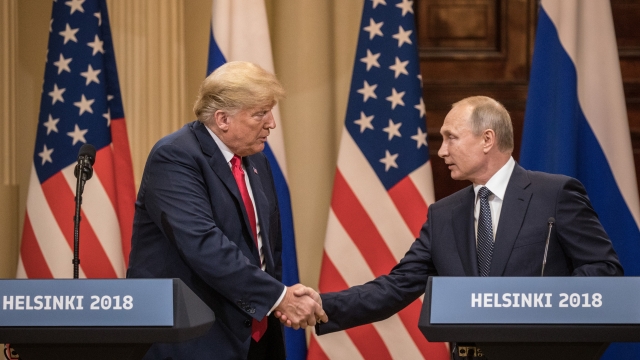 ​President Trump expressed his support for inviting Russia back into the Group of Seven industrialized nations on Tuesday and Wednesday.

President Donald Trump said he believes Russia should be allowed back into the Group of Seven industrialized nations.

President Trump expressed his support for readmitting Russia into the G-7 while speaking with reporters on Tuesday.

"But I think it's much more appropriate to have Russia in. It should be the G-8 because a lot of the things we talk about have to do with Russia," President Trump said. "So I could certainly see it being the G-8 again, and if somebody would make that motion, I would certainly be disposed to think about it very favorably."

And he reiterated his stance on the White House lawn Wednesday.

Russia formally joined the international group in 1998, turning it into the Group of Eight, or G-8. But Russia was kicked out in 2014 after it sent troops to Ukraine and annexed Crimea. The heads of Canada, France, Germany, Italy, Japan, the U.K. and the U.S. all condemned Russia's actions, saying the move was a "clear violation of the sovereignty and territorial integrity of Ukraine." That was also the same year that Russia was set to host the summit, but it was later moved to Belgium after G-7 leaders suspended their participation in the event.

On Tuesday, CNN reported French President Emmanuel Macron agreed with President Trump during a phone call to invite Russia to next year's G-7 summit. During a meeting with Russian President Vladimir Putin on Monday, the French leader reportedly said Russia couldn't come back into the fray until the situation in Crimea is resolved.