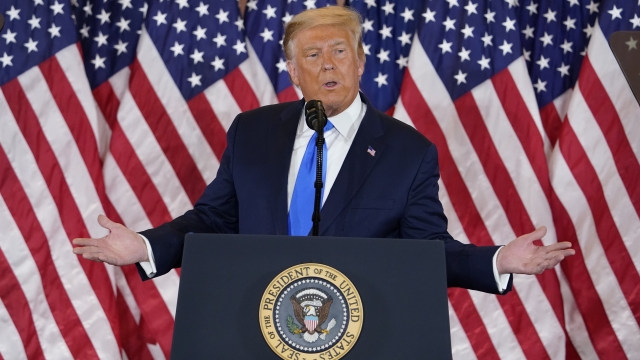 "This is a very big moment. This is a major fraud in our nation," President Donald Trump said. "We want the law to be used in a proper manner, so we'll be going to the U.S. Supreme Court. We want all voting to stop. We don't want them to find any ballots at four o'clock in the morning and add them to the list."

Both campaigns are gearing up for the scenario where this goes to the Supreme Court. The Biden-Harris campaign put out a statement shortly after the president's remarks. They basically said they have legal teams standing by and are ready to fight this out in the courts if need be.

But this isn't just going to go straight to the Supreme Court. The president and his legal team would have to bring a challenge to the lower and state level courts first, and it wouldn't be a challenge on fraud. Rather, it would be the president would have to highlight specific issues that they find with the way states count these votes going in.

This also brings up questions about the role of the newest Supreme Court Justice Amy Coney Barrett. The president made clear during her confirmation process that it was important to get another conservative justice on the Supreme Court. Barrett was asked during her confirmation hearing whether she would recuse herself in this scenario, but she didn't really answer the question. She simply said  she hoped  the senators questioning her wouldn't look at her as a political pawn in that process.